With his hands in his pockets and his head dropped, Kwame, a 23-year old man from Mali, stands on Oranienplatz in Berlin, a dusty square that has become symbolic of Germany’s ambivalent reception of refugees like him: The country last year granted more asylum’s than any other in the EU – a total of 200,805 – but among ordinary citizens, the tensions against foreigners are growing. In Oranienplatz, this recently led to arson against an art project advocating better conditions for refugees.

Berlin, Germany – To Kwame, the hostility underlined the hopelessness in his and other refugees’ situation: “I don’t have any place to go, I just wander the streets, nobody is going to give me a job and there’s nowhere for me to live.”

However, two young Berliner’s are hoping to improve the conditions of refugees and get citizens to match the hospitality shown by their country. They have set up a networking platform called, Flüchtlinge Willkommen (translating literally to ‘Welcome refugees’) a website which lets people sign up to offer refugees a home.

“Basically, we match refugees with families and students, bring them into contact with each other and provide them with a place to live for the foreseeable future” says Jonas Kakoschke  proudly, as he sits, in his down-town Berlin headquarters, next to co-founder Mareike Geiling, speaking of their now flourishing four month project.

“ Germany isn’t actually taking alot of refugees in the grand scheme of things, but I think people just get the wrong impression” says Jonas, “our aim with this is to destroy barriers in the German mindset and slowly create a good dialogue and understanding between the German population and the incoming refugees.”

Quick bloomer
The initiative seems to be successful so far, with the twenty-nine  refugees from the likes of war torn Afghanistan, Syria, Iraq  and several other countries, having being matched to shared flats throughout the country.

The hope for the two young co-founders, aged twenty one and twenty seven, is that both parties will benefit from the experience-“It’s a win win situation for both : the acting landlord will learn about a new culture and the refugee will have somewhere to stay and hopefully learn the language quicker and probably integrate better.”

Initially, the tenant agrees to an extended period in which the refugee will stay a minimum of three months and if they get along, longer term plans will be made.

The inspiration for the project came about when Geilinge, had been travelling and living in Cairo: “Whilst out seeing the world I was immersed in a variety of cultures, Cairo was a stop of place for many immigrants hoping to make it to Europe, so when I came back here and saw refugees struggling to integrate, I had to do something.”

Initially, the project began with Kakoschke and Geiling sending out emails to friends and acquaintances asking them to house refugees; people accepted (to their surprise) and they decided to make something out of it, however Geilingis quick to insist they are doing this out of the goodness of their hearts: “no way is it for money, Refugees-welcome is as a non-profit organisation”.

The two, then began hosting a young refugee named Bakary, themselves: “we had a spare room, so we thought why not? And we cared about the refugee problem, we’ve really enjoyed having him, we’ve learnt a lot about his way of life and he really appreciates what we’ve done for him”.

Funding came in the form of crowd funding ontributions from family and friends- the pair asked for small donations to fund the rent and they now encourage the people willing to house, to collect micro donations.

“We also work a lot with local organisations for example ‘Refugee Berlin’, they put us in contact with refugees that need the housing and we find a match for them, based on the person’s housing criteria.”

The process of bringing tenant and landlord together is carefully managaed and involves them meeting each other before an agreement is signed-“we’re very careful, we get the pair together let them meet, talk and bond, but we’re keen on  the moving process happening quickly, so the refugee isn’t left in doubt.”

Refugee woes
The increasing number of immigrants coming into Germany and the rise of the right wing, AFD party, which holds a heavy anti-immigration rhetoric has resulted in an ‘anti-refugee’ feeling in some parts of German society.

Over 400 attacks on refugees and their accommodation were reported last year by refugee NGO, Amadeu Antonio Stiftung. One of them was in Oranienplatz, when the council offered the migrants, social housing in exchange for them tearing down the makeshift camp they had built to protest the German government’s treatment of refugees. 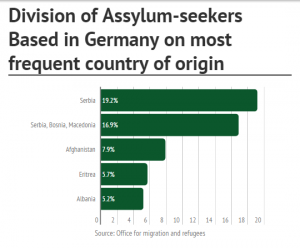 The council then went back on their word and failed to provide the apartments offered and forced the refugees onto the street. Some of them then decided, to occupy a local school for shelter, despite the German police’s presence outside the building and they now hope to set up an international refugee centre.

“They force us to live in camps isolated from society, in inhuman conditions while being watched by guards and treated like prisoners” reads Schlafplatz’s manifesto, a pro refugee organisation which is also setting up a housing scheme for misplaced refugees.

The Residenzpflicht law, which requires refugees to stay within the boundaries of their registered district, has also come under criticism as being a violation of human rights, as they claim it restricts “free movement” leading refugees having to stay in one place for up to ten years.

“I just don’t get the xenophobia that exists in this country, so much ignorance” laments Jonas- “but hopefully we’re making a difference, we want this to be a political statement against right wingers.”

That might have already begun as the housing initiative trend is spreading –“we’ve already had people from countries like Austria, Britain and France email us saying they want to start something similar, hopefully it’ll catch on”.

For Kwame, this trend couldn’t come sooner, as he will be spending another night wondering the streets- “I came here because I wanted to keep away from the conflictive situation in my country, but I’ve come to realise it’s hard to forge a life here- no one trusts me”.

He stares into the distance once he finishes telling his story, as if he will never find solitude, but with more initiatives “catching on”  like Refugee Welcome, they will start to build the trust and provide that glimmer of hope for people like Kwame.