For a society that is gradually moving to the west, a radical nationalist movement is appealing for youngsters afraid of their country shaking off its traditional values. “My parents and neighbours are proud of me,” says the 21-year-old Dobrica Petrić.

Belgrade, Serbia – ‘Loved by few, hated by many, respected by all,’ adorns the concrete wall accompanied by the portrait of a soldier. Almost every corner, alley or unlit street in Serbia’s capital Belgrade contains controversial graffiti. Wherein historical battles and generals who fought in the 90s for a ‘Greater Serbia’ are praised and admired. They stare at passing pedestrians with strong and powerful expressions; an uneasy experience for foreigners as these drawn men are internationally known for sitting on the benches of international war tribunals.

Strong nationalists are no longer represented in parliament but still interwoven in many layers of society. Under the radar, they influence the right-wing spectrum of politics and once in a while they pop up when they fight LGBT-activists during the Gay Pride marches.

One of them is the 21-year-old Dobrica Petrić, a dedicated member of one of the biggest nationalist movements of Serbia. His shoes are perfectly polished and the creases in his trousers are as sharp as his freshly shaven head. Even his eyebrows are trimmed giving the essentially friendly young man an aggressive, militant look. “Casual national is what we call it,” explains the IT-student in the lobby of the Moscow Hotel, a location not chosen by coincidence: “I love Russia, especially Putin. He is a hero for us and much closer to our believes than the west. We are brothers in faith with the Russians.”

“We” are Petrić and his friends who are all member of the far-right nationalist movement СНП 1389 (Serbian National Movement 1389). Their logo adorns many walls in the city and the year 1389 reminds people passing by of the adulated ‘Battle of Kosovo’ during the middle ages. Though this battle ended hundreds of years ago, it is still fresh in the minds of the youngsters of SNM since Kosovo declared itself independent in 2008. A separation which leads Petrić and his friends to the parks and forests around Belgrade to train in improvised ‘gyms’: “We have to be ready to defend our fellow-Serbs in case of a renewed threat.”

Exchanging blood for support
Dozens of boys doing push-ups, sit-ups and sprinting in the forests with balaclavas on may sound strange to outsiders. For Petrić it is all normal and not something anyone has to be scared of. “We are really polite and neat. We help elders and were the first people who volunteered when the river flooded Belgrade last year.”

The grouping’s popular Facebook page is filled with pictures of Putin, protests and Serbian flags. It also involves photos of SNM-members showing their muscled arms wrapped in bandage: they have just given blood to the blood bank. “My parents and neighbours are proud of me; they love that I contribute to society through the movement.”

Assistant professor in politics, Jovo Bakic, Faculty of Philosophy at the University of Belgrade notices a pattern: “Working-class youths, usually unemployed and generally not well-educated serve as a recruiting base,” he writes in ‘Right-Wing Extremism in Serbia’. According to Bakic, the extremely high unemployment, 50 percent for people under the age of 30, aggravates the attractiveness of extreme movements.

The time youngsters spend at right-wing movements is not only appreciated by elders but by children as well, according to Petrić. “It is not us who spread our logos with graffiti, they are mostly fourteen years old who like and see what we do.” 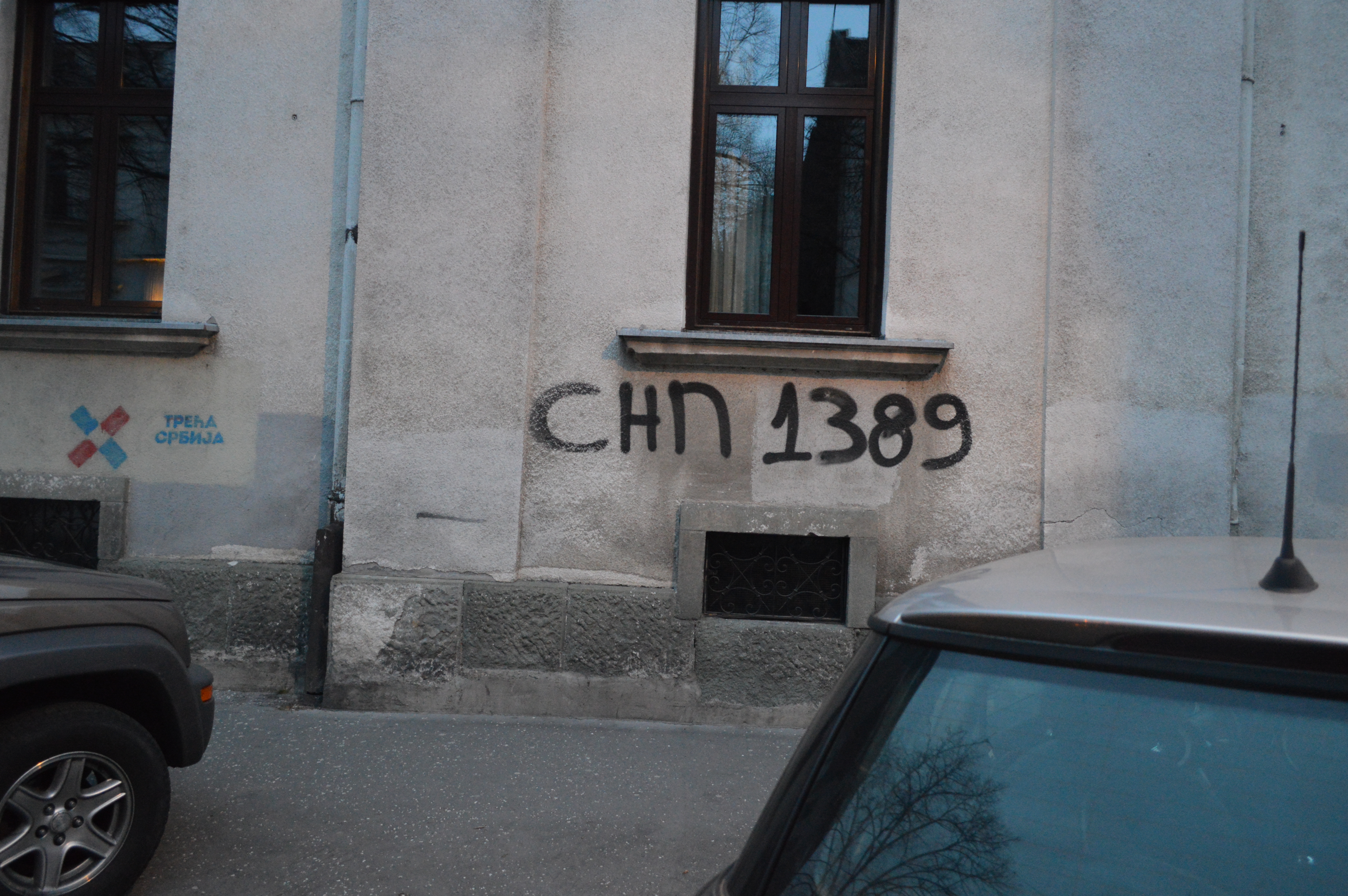 One of the more than hundred SMP (СНП in Serbian) tags you can find in the streets of Belgrade. 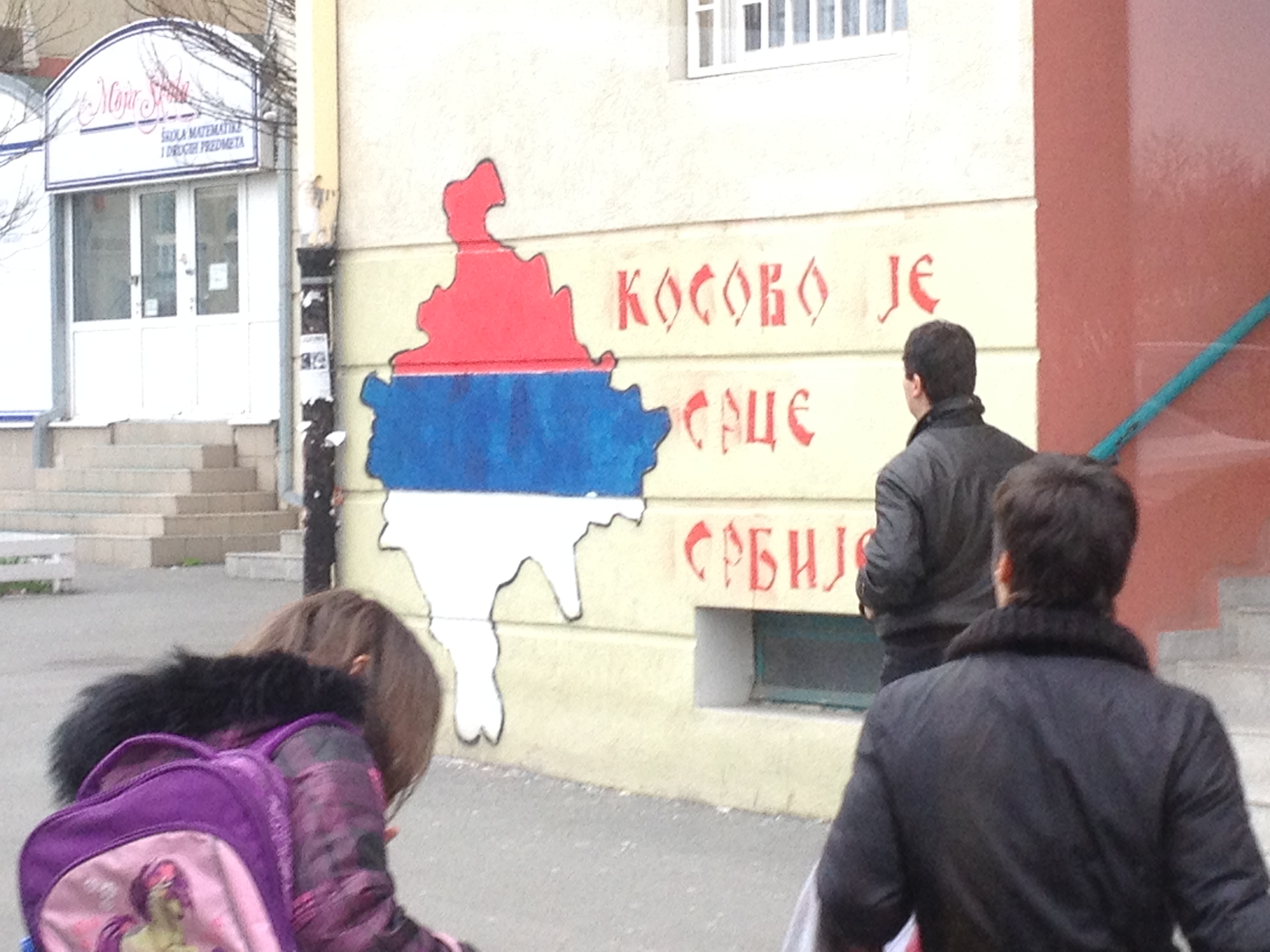 "Kosovo is the heart of Serbia," yells the wall at pedestrians who are familiar with the many graffiti 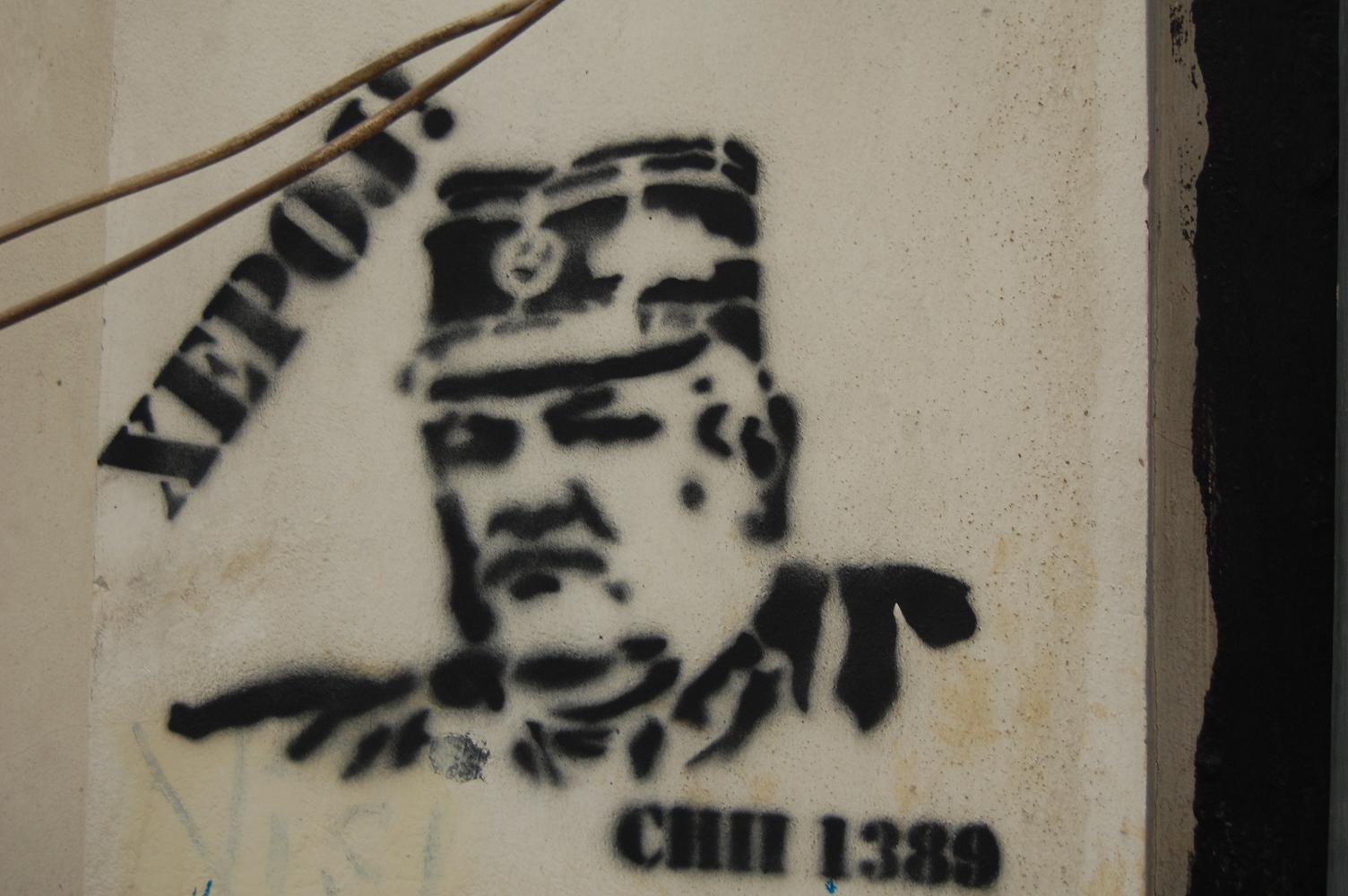 'The Butcher of the Balkans' he is called by many. But for Dobrica Petrić and his friends he is a hero. 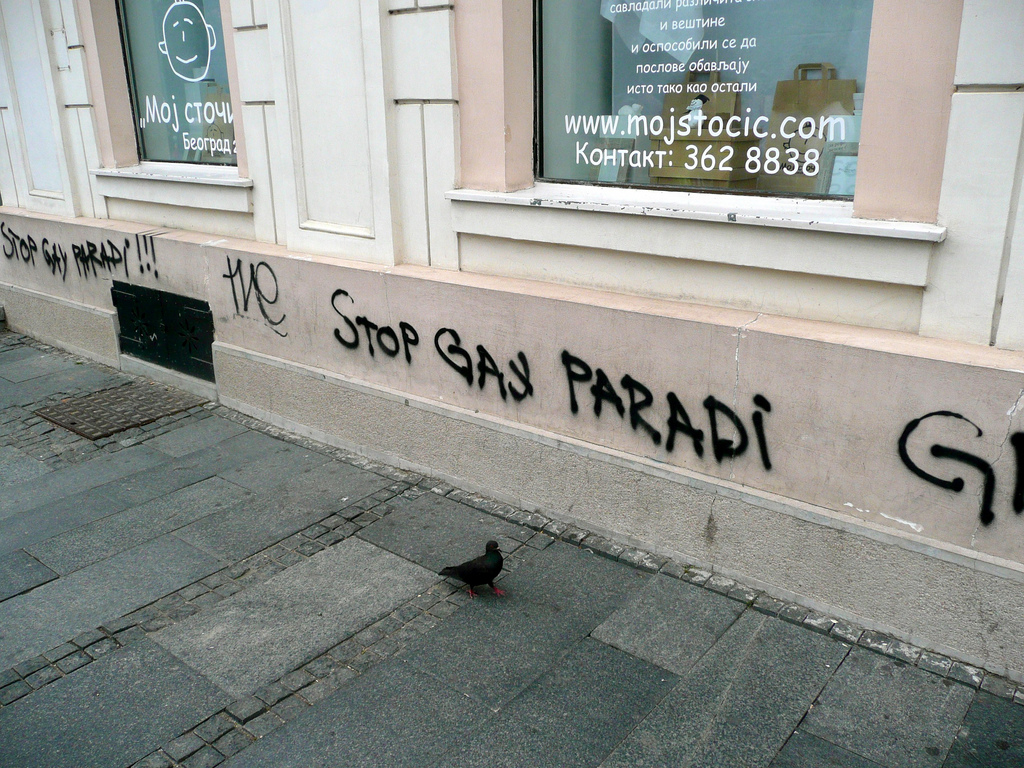 Although the most strong anti-gay statements date from 2009, they are still easy to find


Not only their charity work causes popularity, their ideals resonate in society and lead to support from many who agree with stepping back from the EU, embracing the Christian Orthodox church and suppressing homosexuality.

Fighting the “Pride of shame”
The gay pride is one of the moments which reveals the support far right-wing still has in the country, where according to the Gay Straight Alliance, half of the population considers homosexuality a disease. While the heavy violence against LGBT-activists during the pride in 2010 shocked many outside Serbia, it was grist to the mill of extreme right-wing movements in the country. “Attacking the Pride Parade serves to attract broader popular support, since homophobia is widespread among the Serbian population,” says Bakic.

After the failed pride of 2010, the most extreme activists were sent to jail. Among them was Mladen Obradović (35). As the leader of Obraz, together with SNM among the most prominent nationalist movements in the country, he was held responsible for the many injured in 2010. “This pride of shame goes against God, our tradition and is therefore insulting,” he explains in a café surrounded by other guests.

Obradović goes far in defending what he calls the ‘absolute truth’ and is considered one of the reasons that the pride of 2009 was cancelled. The threats he expressed with his fellow-members were that impendent that security couldn’t be guaranteed. ‘Death to gays’ and ‘blood will flow, there will be no gay pride’ were just some of the slogans found on Serbian walls as members of Obraz covered the concrete of Belgrade with graffiti.

In 2014, a calm gay pride finally happened due to the strict separation of LGBT-activists and radicals such as Petrić and his friends. “We couldn’t reach them during the pride, it was not possible at all due to fences and the many policemen.”

Culture of violence
The biggest threat, according to Bakic, is the “culture of youth violence” that groups like SNM and Obraz trigger. When asking Petrić about the use of violence, he skirts the question a bit but admits that there are situations where aggression is allowed during for example protests. This is one of the reasons his mother is worried now and then about his visits to the movement: “she tries to keep me home when we are planning a manifestation.”

Obradović simply admits that violence is not shunned. He considers it even necessary. “It is as turning the other cheek,” he explains, referring to The Bible. “They attack us as well by forcing unnatural things [open homosexuality] upon my children. That is violence according to me.” To show how broad he interprets ‘aggression’, he adds: “hitting someone hurts, pushing someone hurts and spitting and yelling at someone hurts as well. So what is the difference between pushing and yelling or, in the end, provoking? They provoke us and we push back. It is all the same.

His time spent in jail and the fact that Obraz was legally banned by the Constitutional Court of Serbia in 2012, didn’t change the mind of Obradović. Instead he signed an agreement last year with the Serbian Radical Party, a party deeply rooted in nationalism, wherein they assured each other of closer cooperation.

Obradović: “Look around in this café, if you ask anybody about their opinion on homosexuality or Europe they will agree with me.” The former theology student also claims support from the Orthodox Church. “They pray for us.”

Graffiti and the extreme right wing: both suppressed but always visible and tangible.