Every second youngster in Serbia is unemployed and in a country rife with corruption and a stagnant economy, they can hardly be blamed. There is one thing that might just be keeping them from protesting on the streets of Belgrade though – the black market.

Belgrade, Serbia – Mira* is about to enter the final year of her second degree. She’s studying to be a psychotherapist and is, in the eyes of the Serbian authorities, unemployed. But tomorrow she’ll wake up and get to work. Mira, like so many others in Serbia, works on the ‘black market’. She treats patients, or ‘clients’ as she calls them, in the basement flat of an unassuming Belgrade building.

Mira has been in the city since 2009, when she left Kosovo with her psychology degree in her suitcase and came looking for work. She has found what she was looking for, but not always ‘on the books’.

Two jobs as a psychologist: One paid without a contract followed by another with a contract but without the Dinars that should have came with it. Mira says she’s ‘satisfied’ with the latter as it gave her a chance to get some experience but not everyone in Serbia has the financial freedom to work for free.

The annual Serbian GDP is currently just over €5550 per capita; lower than it was when communism fell in 1989 and according to the World Bank, 25% of the country live below the poverty line. Without the financial freedom, and thus an urgent need to rejoin the labour force, many Serbs turn to whom they know, not what they know in order to find employment.

According to Jovan Protic, the International Labour Organisation’s coordinator in Serbia, corruption is ‘omnipresent’ in the country. He believes that the prevalence of corruption has only served to strengthen the informal sector; a sector that, according to a 2011 report by USAid, employs 25% of the country’s workforce.

Corruption is still a regular part of the discussion in Serbia and Protic believes this has left some youngsters believing that all that is needed is for someone to make a call and a ‘red carpet will appear and they’ll be able to walk into a job’.

Someone who hasn’t waited for the ‘red carpet’ to appear is Mira. Once it became that the jobs available for a young psychotherapist weren’t going to sustain her life in Belgrade, she started out on her own. Although she still hopes that her unpaid job at the clinic will translate into a ‘real’ job, she says “I’ll try my best to, one day, earn normally for a living”. 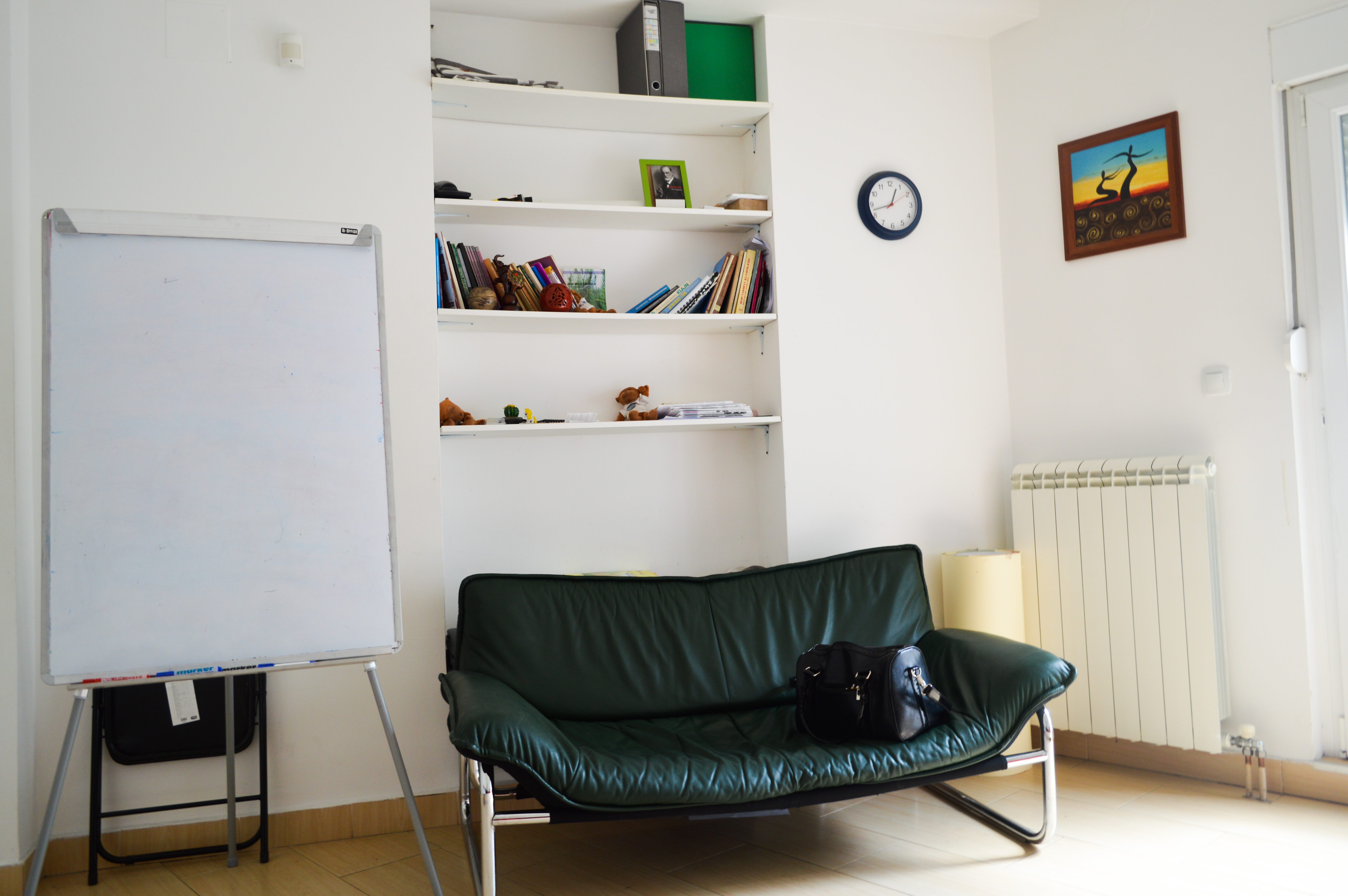 Mira's sofa. Just in case you need to take a lie down.
Not your standard couch. Mira’s treatment room has all the features of any other… minus the studded leather. 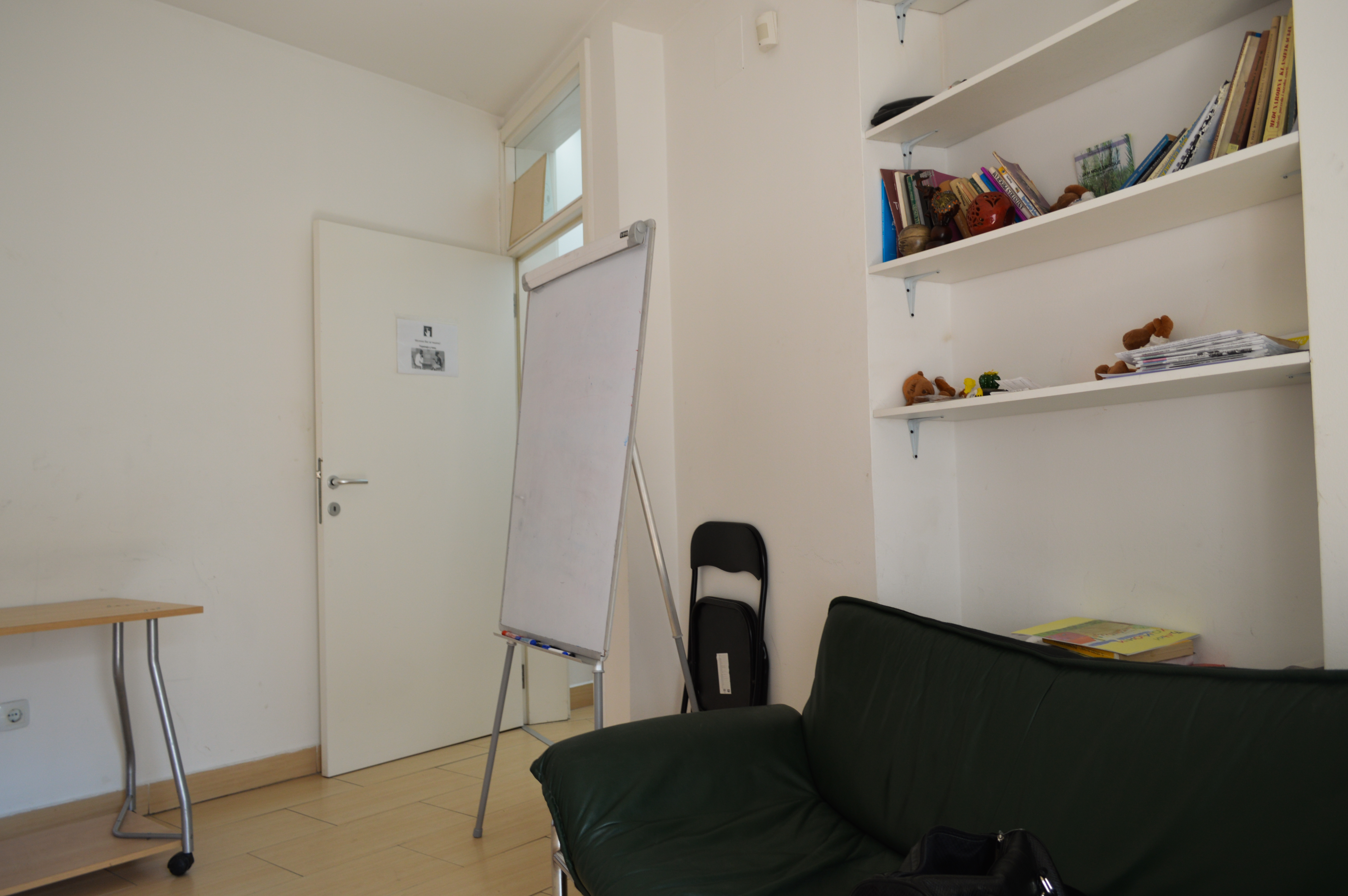 The view from the window
Mira's 'clinic' isn't exactly spacious. 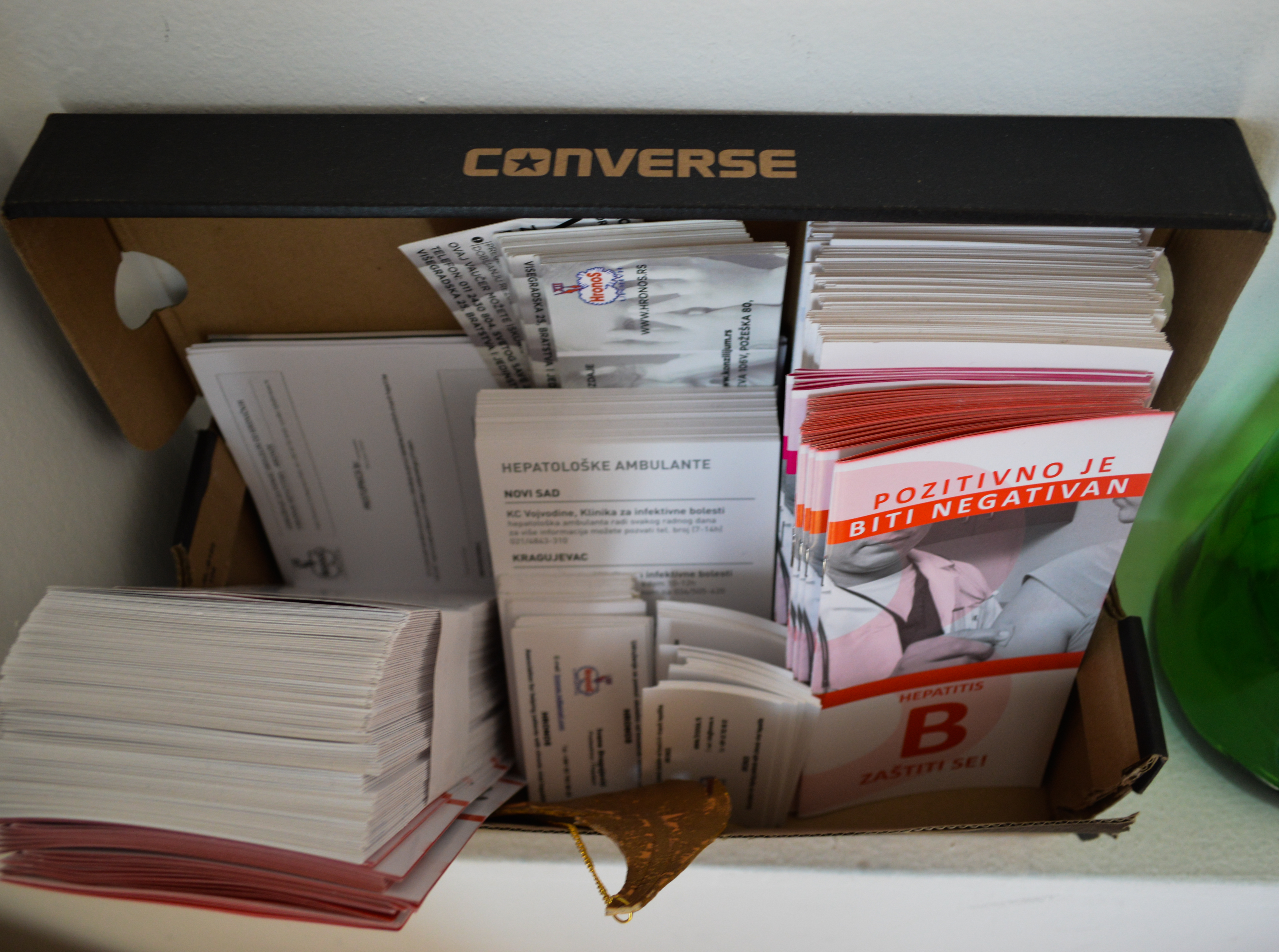 Make do with what you have
Mira’s handouts: A shoebox isn't a common sight in most clinics. 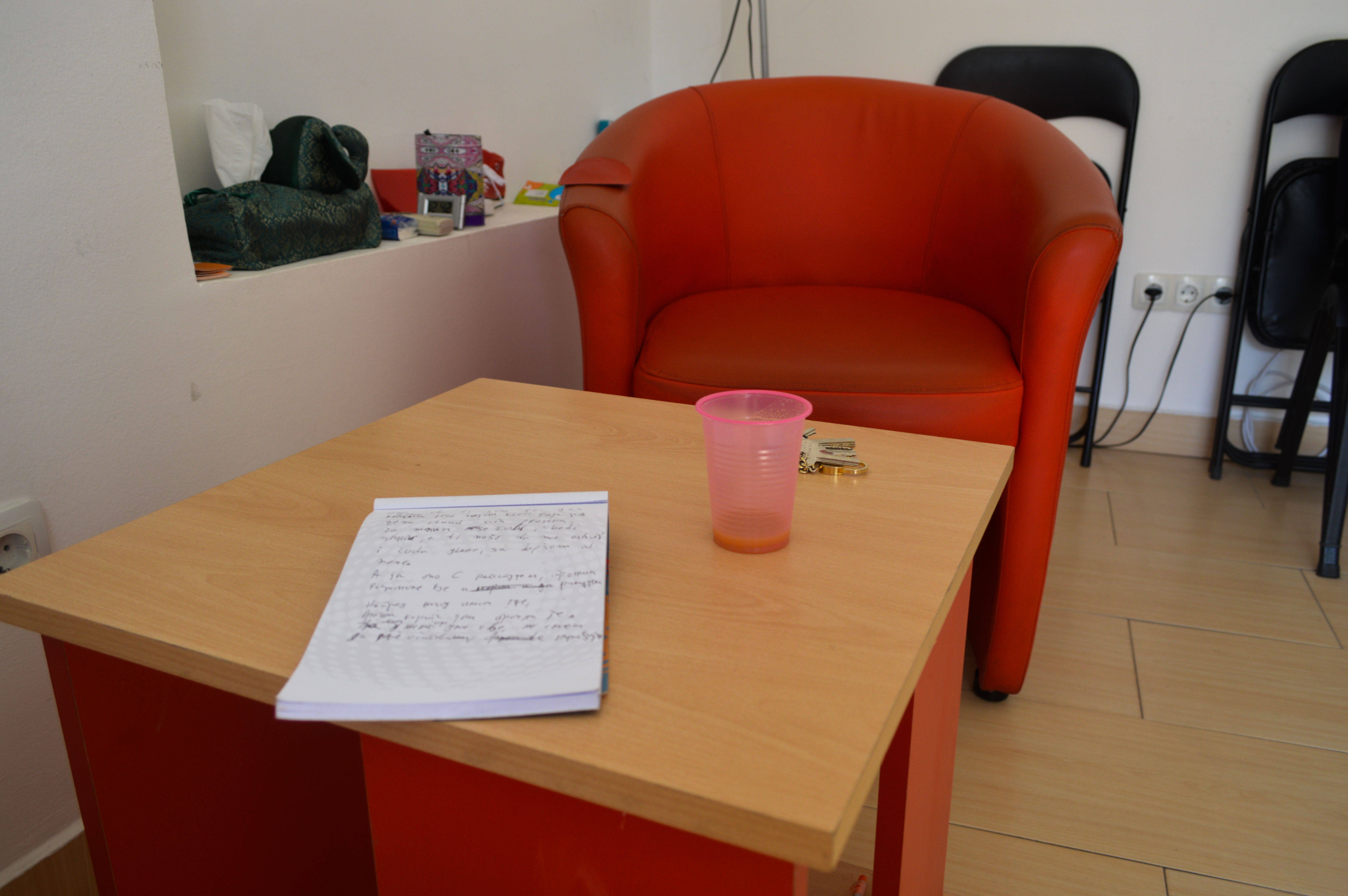 The hotseat.
Black market psychotherapy isn't a common commodity but if you want some, this is where you sit. 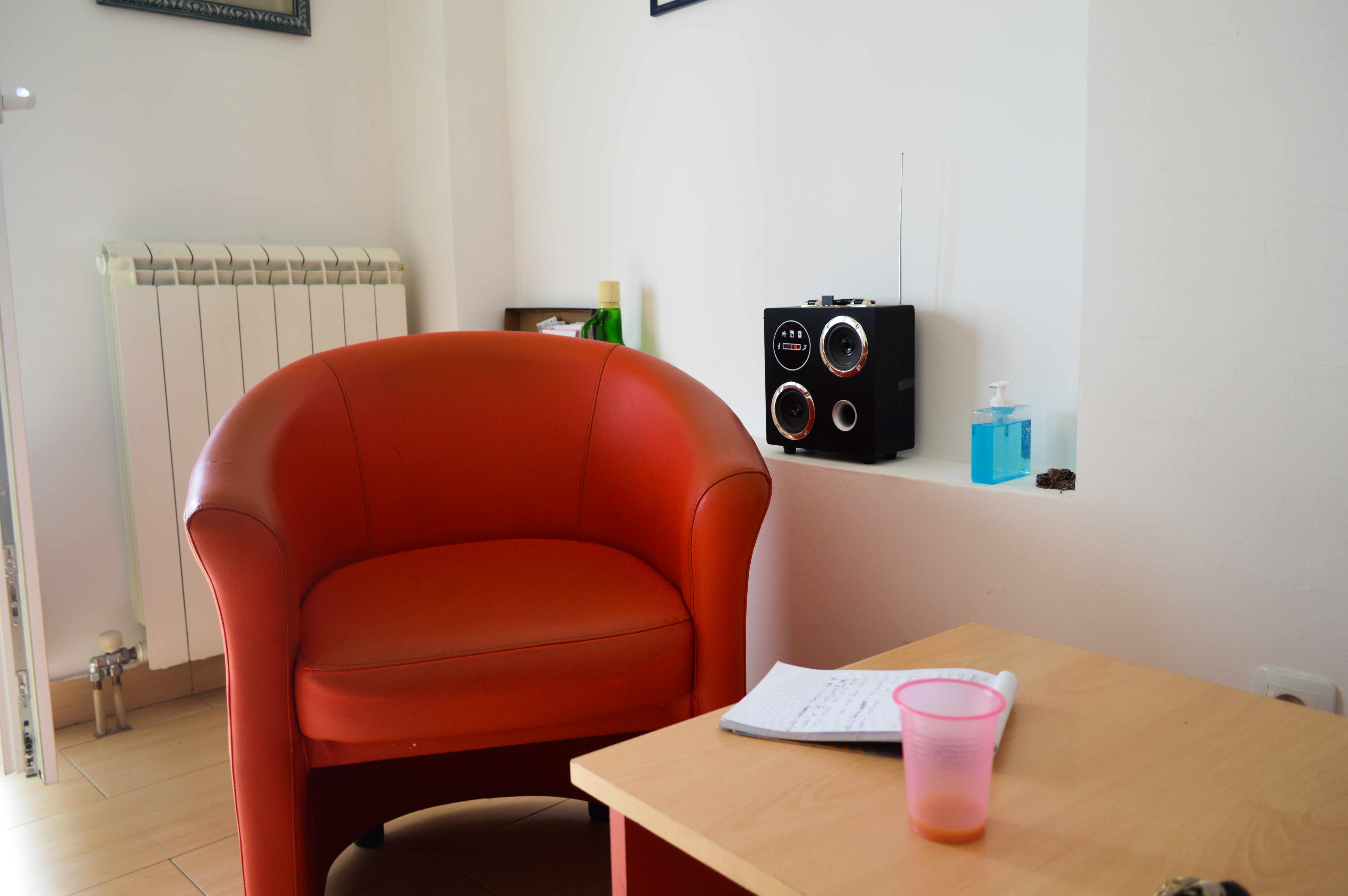 Ready and waiting
Mira's chair awaits her while she awaits the next patient.

Mira’s clinic from the inside

This could mean finding work wherever possible and contributing to the Serbian society, if not through tax but by spending the money they earn as a result of their work. Just like Mira’s basement surgery.

This creates a long-term problem though. According to Mihail Arandarenko, labour market professor at the University of Belgrade, the transition from the informal sector into the formal labour force isn’t smooth enough:

“Everyone can engage in this secondary sector but if you want to re-enter the labour market you need to get in a long queue and look for some corruption.”

Mira has found Arandarenko’s theory to be reality on the streets of Belgrade. Ever since moving to the city, she has struggled to find work:

“As someone coming from another city it was impossible, you can’t get a job without knowing someone or having political connections,” she says.

Three traits, three deep breaths
It wouldn’t be unreasonable to imagine that ‘omnipresent’ corruption and a quarter, officially, living below the poverty line has resulted in a dire situation but like Mira, many Serbs ‘just get on with it’. According to Arandarenko, Serbia’s “unique traits” have led to something much more palatable.

He believes that there are three ‘traits’ that contribute to an overall “lack of pressure” on the government and, thus, no “urge to reform”. The first, and most prevalent, is the informal employment sector that Mira is a part of. The second is Serbia’s high emigration leading to large amounts of money being sent back home. Arandarenko believes that this is becoming Serbia’s main export:

“We don’t export goods, we export labour and the labour sends back money. This means our employment statistics are horrible but families have money.”

How much money is anyone’s guess but, in 2011, the World Bank estimated that remittances alone add around 10% to the country’s GDP.

Arandarenko’s third ‘trait’ centres on a unique ‘family loyalty’: According to him, within Serbian families there is a mindset that if one member of the family, however distant, is employed by the state then that is a ‘privilege’ and the family should stay loyal. In Arandarenko’s view, any form of protest against the government would be a breach of this loyalty.

According a 2011 government report, Serbian state owned entities employ around 45% of the country’s labour force: 765,000 out of a workforce of 1.7 million. If Arandarenko is right there is an awful lot of loyalty around dinner tables across Serbia.

Djordjevic believes there is a fourth reason that people don’t see Serbian youngsters protesting in the streets; they are spending longer and longer in education.

Mira, who is in her seventh year of university, may be one of those spending longer than average but she believes she is different. She says that while too many in Serbia go to university ‘without a plan’ she knows what she wants:

“I’m working as well, I need to, to afford to live. I do all these jobs and this degree because I looked to the future and realised what I wanted; to get a real job, in a real clinic”

‘Degree Mills’
While studying at the American-based Albert Ellis Institute in Belgrade, Mira may be learning more and more about her profession but not in the eyes of her own government. The degree, and even the profession of psychotherapy, isn’t recognised by Serbian labour laws.

According to Arandarenko, the Serbian government refuses to recognise some degrees from international institutions in order to protect national education. They do this through a system, which he describes as ‘obsolete’ and ‘long and expensive’.

Even though her second degree may not be recognised, like her unpaid work, Mira views it as a stepping-stone in her career path. However, in the eyes of some, private universities don’t offer a legitimate education.

Arandarenko believes they are nothing more than ‘diploma mills’ and Protic is also skeptical of their legitimacy. He views them as just another part of wider corruption and says that it has gotten so bad that the best way to enter the labour market is to “pay for your degree at a private university and then find someone you know”.

Despite still being a Physics student at the University of Belgrade, Djordjevic is even more critical of the country’s education system:

“The core problem is that our education system doesn’t support the 21st century, we’re trying to teach new tricks with an old dog.”

The dog may be old but it isn’t cheap; Mira’s initial degree from the University of Pristina cost €1000 a year. Her current studies in the newer, private sector cost the same and according to Arandarenko don’t offer any real education.

All of these years at university means Mira has amounted €7000 worth of debt. She says she has only paid of 30% of her fees despite having worked constantly since moving to Belgrade six years ago.

When asked if she has any regrets, Mira wavers before conceding, “Some part of me, sometimes, wishes I’d studied something else. Electronics, for example.”

She adds that she is losing hope that she will ever find her “dream job” without “the right connections” and that despite being in the capital for six years, she still hasn’t “found her place”.

Despite Mira’s growing disillusions, Arandarenko is, somewhat, positive about the future of his country’s labour market, a market he describes as “sub-optimal but bearable”:

“The situation is harming us in a harmless way, we all have options as individuals and most young people work it out somehow. Young people have never in history faced better perspectives.”

When pressed on her shrinking hope and Arandarenko’s comments, Mira admits that part of her still believes it’s all been worth it, “one day this will all pay off, whether it’s in Serbia or somewhere else”

Whether she’s the one sending the remittances or one of those continuing to work in the shadows, Mira looks set to continue to be part of Serbia’s informal economy.

*Mira is a pseudonym, she asked that her name be withdrawn over fears the article would harm her career.