Multi-instrumentalist David Maxim Micić (24) couldn’t make sufficient money with his music in the local scene in Belgrade. Turbofolk – a popular Serbian genre – and cover bands dominate the musical landscape in the capital. In the United States and other countries in Europe his art is more appreciated, but even then it’s sometimes hard to get visa’s for gigs. Micić played himself out of isolation through the internet and is able to live off his music nowadays.

Born in a grey flat in Novi Beograd, Micić was exposed to music from a young age on. His father was a drummer in a Serbian rock band called YU Grupa in the seventies and taught him how to play the rhythmic instrument. From age five to fifteen, he took classical piano lessons and after that he picked up guitar, the instrument he uses the most nowadays.

When he was seventeen, Micić studied composition for one year at Berklee College of Music in Boston till money ran short and he had to return to Belgrade. Through selling his largely instrumental EPs as solo work and the first album Lun of his band Destiny Potato via the internet, he nowadays earns enough money to be a fulltime musician. Micić currently lives at his parents, though for good reasons.

“I want to buy my parents a house in Croatia near the seaside for their retirement. I was born in Croatia and the sea always had a strong appeal to me and my parents. I don’t really need anything myself, because my equipment gets sponsored by various brands.”

Would you say that it is possible for young musicians in Belgrade to earn a living with music?
“I think that in most places where you can afford the basic equipment, it is possible to make it if you have the quality. And internet is the main reason for that. It might be easier in the United States, because you are at the core of the happenings there. Also, it is harder to go from here to another place physically. We were recently refused visa’s for the UK for some unknown reason. Two of us got visa’s, two of us didn’t. In Belgrade, the easiest way to make some money with gigs is to play in a cover band. It is kind of sad: talented musicians are killing their instruments, their creative potential, for some wrong kind of pleasure. They settle for playing in cover bands.”

A friend of yours told Euroviews that you don’t perform in Belgrade. Why?
“It didn’t seem that people in Belgrade were as interested in our music as the people in the rest of Europe and the United States. Lately, more and more people are showing appreciation for our music. If I would perform here, I’d like to organize an event, not just a regular gig. The underground scene has many creative musicians and deserves a big, complete event that combines visual spectacles with good music. I think it will motivate the whole scene.”

How would you describe the musical scene in Belgrade at the moment?
“There are many awesome bands and talented musicians as well as some new youngsters playing jazz, but it is not the right market for them. We have a very specific kind of popular music in Serbia which is called turbo folk. It is a mutation of all the different genres you can imagine combined with a little bit of sugar and artificial sweeteners. I personally don’t like it, but I guess it will continue to exist as long as people listen to it and that’s okay.”

How do you view your own future?
“My market is online. I can basically work from any place with an internet connection. I imagine my future living at some place for a few years and then moving to another place for a few years, but always with a home base. That will probably be Belgrade. If I don’t fall in love with another city or a girl from another city.”

For Micić it might be a bit easier than other musicians in Serbia to sell his music via the internet.

“In Serbia you can’t sell your products on the web with PayPal. It is only possible to buy products with it. This is a big problem for many young people that I know who have an online business, because there is not a great alternative. I am lucky: I have a manager in the US that takes care of my record sales there via PayPal. When I am in the states I can access my money.” 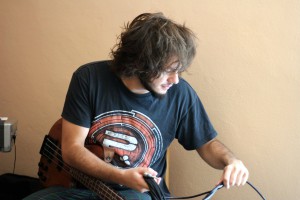 How would you describe your own music?
“It changes over time. I don’t like to speak in genres, it’s rather different colors blending into each other. When I started releasing my own music I was 20. As the time goes by, I am getting less worried about people looking at me and thinking: ‘Wow, what a guitarist!’. My upcoming album will be called Ego & Eco. There is this part in me of making music for the sake of my own ego, while Eco refers to making music for the sake of music. It’s the more natural state.”

Has Berklee changed the way you look at music?
“Yes, definitely! The approach to music is very different at Berklee. It was like one year of 24 hours of music every single day. That really changed my perspective, especially coming from a place like this. People here have some kind of complex, a fear of doing bigger things. A lot of talented musicians from Belgrade end up doing cheap gigs in a cover band five days a week and they barely get by. It’s sad because they could be out there doing big things, but they settle for that. In Berklee that mentality doesn’t exist. At that school you enter your small room, get out your notes and start practicing, while you hear someone in another room killing his instrument. You are like: ‘fuck, I need to practice’. Instead of staying one hour, you stay for four hours in the room.”

Do you want to become as big as possible with your band or rather stay on the background?
“We all grew up listening to our idols. I listened to bands and artists like Pink Floyd and Vangelis. They are all big, so you naturally dream big when you are entering the world of music. It would be a lie if I would say that I don’t care. I’d love to leave a mark, but it is hard. There are so many talented and amazing people playing instruments today, so you really can’t expect much. You can hope for it, but in the end you just have to do what you enjoy doing.”