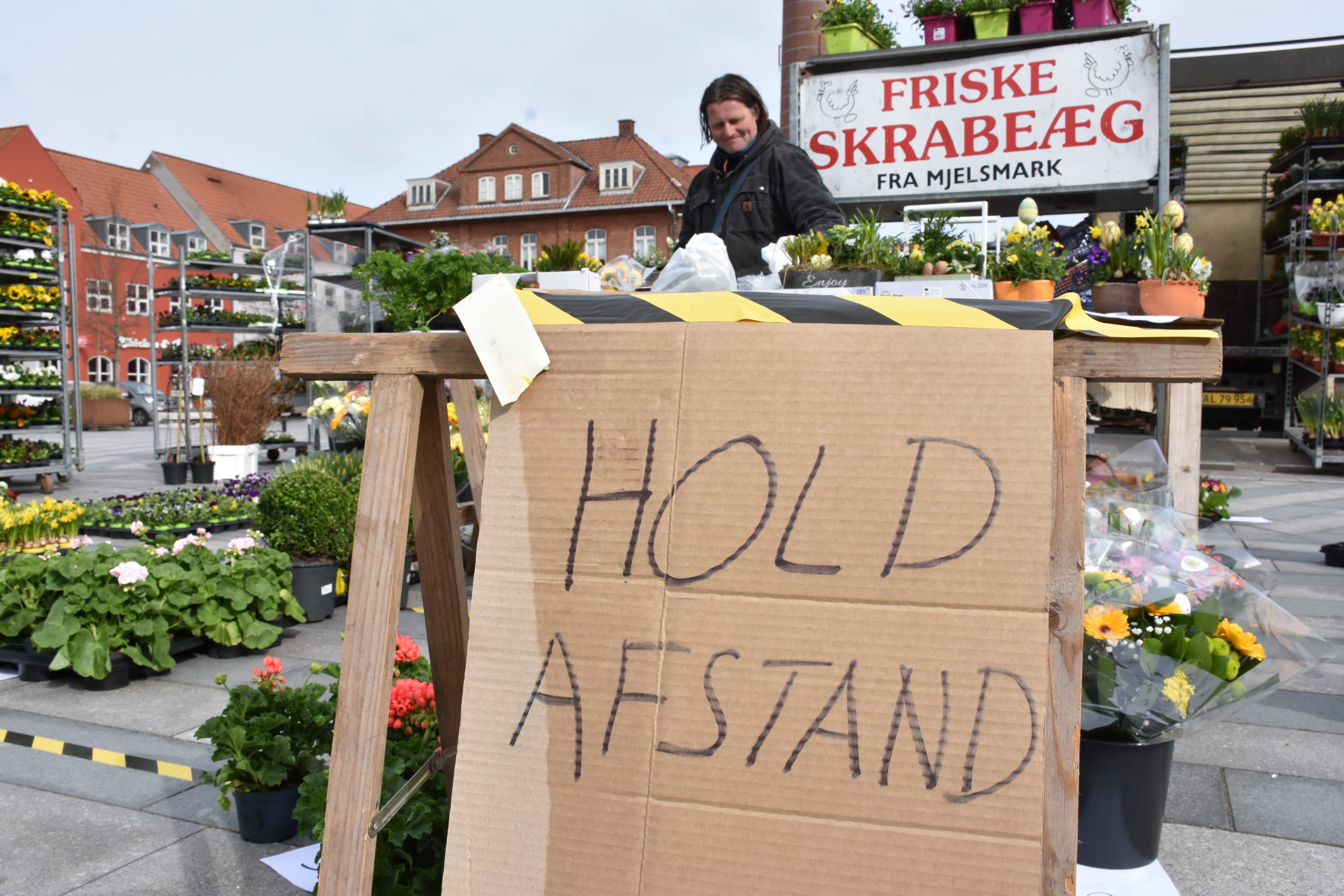 On a market square in Haderslev, Denmark, the corona consequences are easily visible. At least on Tuesdays and Fridays when the square hosts an outdoor market. Here, there are no talks of billions of dollars or thousands of patients. It’s just small businesses trying to survive the crisis.

’’Keep your distance’’. Knud Olav Skovrup’s homemade cardboard sign tells his customers not to come too close to him. He is one of just two traders who have returned to the outdoor market in Haderslev, a town in southern Denmark with around 20.000 citizens. There aren’t many of them though. Customers.

Along with other markets around the country, the police on March 24 decided to shut down the market in Haderslev because of restrictions imposed by the Danish government, determining that no more than ten people are allowed to gather and thus sending the traders into uncertainty about how to make a living.‘’There were a lot of people here that day. Many were stuck in the old habits, but now we are better at keeping our distance and being careful and so are the customers,’’ says Knud Olav Skovrup.

Two weeks after being shut down, the market was allowed to reopen, giving the businesses and more importantly the people running them a chance to provide for themselves and their families. Because of short notice, not many have returned yet. Sometimes, the few traders even outnumber the customers. It is an example of the confusion and difficult decision making that authorities around the world have had to deal with since the coronavirus started spreading. After the market was forced to close, a gardener from the area contacted a locally elected member of parliament, Jesper Petersen from the Social Democratic Party. The politician then raised the issue with the Danish Ministry of Justice and subsequently, the Danish national police changed its guidelines. Just two weeks after being forced to close, the local market could reopen.

Knud Olav Skovrup wanted to return to the market as soon as he heard that he was allowed to do so. ‘’This is my livelihood just like the hairdresser lives by cutting hair and just like the baker lives by baking bread. This isn’t just a car boot market,’’ he says.

: It was Yvonne Reiners’ boss who contacted the member of parliament, Jesper Petersen. She sells goods at different outdoor markets five days a week. She is glad to be back in Haderslev. ‘’Luckily I don’t have to make these decisions at the moment. We had already sown our plants in January so it would be a shame if we couldn’t sell them,’’ she says. Green cones marking where customers have to wait for other customers to leave surround her van at the market square in Haderslev. They aren’t to much use as there is very rarely more than one customer present at once. Often there are none at all.

Chances are, that you won’t see the direct or indirect consequences of the corona crisis if you look out your window, but here at the market square, they are easily visible. This place used to be full of customers and traders on Tuesdays and Fridays. Now, it’s empty and grey. With the buzzing and small talking people gone, the changes can be heard too, as nothing drowns out the cawing of the seagulls. The former French footballer Eric Cantona once said that when the seagulls follow the trawler, it is because they think sardines will be thrown into the sea. Here in Haderslev, they can usually sit and wait for hours to see if the local fishmonger drops anything for them to snap up, but he is no longer here.

The current corona crisis has worldwide impacts. Thousands die every day, some countries have curfews, some are slowly preparing to reopen and many businesses are forced to shut down. The media report on billions of dollars or euros or pounds or kroner in aid for various industries whilst anyone with a microphone has a go at predicting how the virus will affect the economy and our society. It can be difficult to understand the value of the numbers mentioned, but at the market in Haderslev, the price tags are smaller. Here, you can buy plants for 15 kroner (two euros).

‘’I heard from my friend that the sweet florist was here today. So I had to come down to buy something,’’ one customer says as she tries to decide what to get. In Haderslev, they hope that more customers like her and more traders like the sweet florist Knud Olav Skovrup will return soon so that the market and the traders that use it can keep their boats floating.

The coronavirus has had greater consequences throughout the world than cutting down the number of people going to an outdoor market twice a week in southern Denmark. But it serves as an example that no part of society has escaped covid 19. It shows that at the end of the day, people like Knud Olav Skovrup just want to survive by keeping their livelihood.