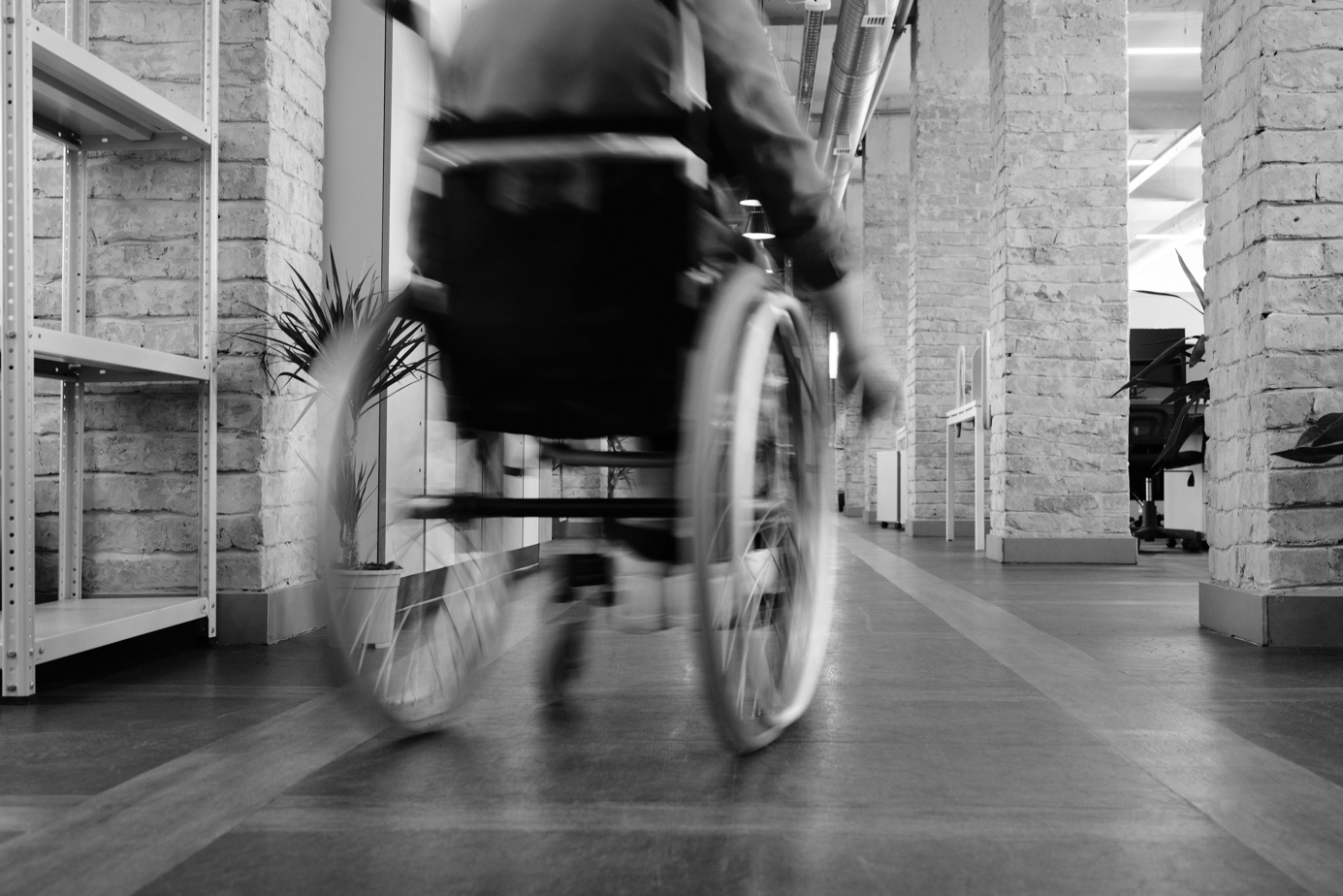 Families with disabled children can choose whether to bring their child to the institution or keep them at home. (Photo via Pexels)

At the beginning of March, institutions for disabled children in Belgium were forced to close themselves off from the outside world. Parents then had the choice to continue caring for their child at home under limited home supervision or to bring their child to the institution without being able to see them for a long period. After two months, families with a disabled child begin to lose their patience and energy. They have no perspective, because they do not know when this corona crisis will end.

On March 27, 1988, the life of Marc Dujardin changed completely. On this day he became the proud father of his son Tashi. Before the birth he and his wife had specially returned to Belgium to be sure that everything would be safe. At that time, he and his wife lived in Bhutan – a country situated between India and Tibet – where he worked as an architect and urban planner for the king at the request of the United Nations. It was safer in Marc’s eyes to have his wife give birth in a Belgian hospital, because the care in Belgium would be better.

He still regrets this decision today. “What could have gone wrong, has gone wrong. Tashi now has CP – Cerebral Parese – or in other words a cerebral palsy due to lack of oxygen at birth,” Marc says. “Looking back on it now, health care is not much better here in Belgium.” It was not until a year after the birth that he noticed how bad his son’s handicap was.

The cerebral palsy had made Tashi unable to do anything on his own. Marc stopped his international career and decided to stay in Belgium. He started to focus on the care of his son. Different therapies had to make sure Tashi learned as much as possible. Yet these therapies were not very successful. Again, Marc claims that Bhutan would have been a much better option. He is sure that Tashi would have learned a lot more.

Now, Marc and his wife are divorced. Marc doesn’t take care of his 32-year old son full-time, but Tashi spends most of his time with his father. Meanwhile, Marc has also developed a language with Tashi to know what he wants. “Tashi can’t say mommy or daddy, but he can express clear feelings. You need to know when you talk to Tashi that you are a question and an answer. What makes me proud is the fact that I really feel that he understands what I’m asking. Tashi responds in the right way,” Marc says.

His whole life has been adapted to the well-being of his son. Everything in his life has been organized to keep it as achievable as possible. He also built a whole studio in his own house so that he can supervise his students as much as possible at his own place near Tashi.

But then the coronavirus decided to come to Europe and more specifically to Belgium. Life changed completely, also for Marc and Tashi.  As a single father, he was suddenly on his own. Normally the home nursing and the PAB assistant – a great help for Tashi and Marc – came every day to help him with the care of his son. “I’m suddenly making double shifts. Besides taking care of my son, I also have to make sure there is bread on the shelf,” Marc says. He is currently a professor at the KULeuven, a job that also takes a lot of time.

“The home care has disappeared, because they just suggested an impossible hour to come and wash Tashi and feed him. It would be the middle of the day at 11 am, but Tashi and I always wake up early and I would lose my whole day,” Marc says. “It’s also impossible to keep him waiting that long to eat. So, I’ve taken that task on myself now.” The reason why home care could come so late is because it would be safer for the at-risk patients.

Also, the PAB-assistants can no longer come to visit, because at the moment she has to take care of her small children who both do not have school. “Even soon as her eldest might be able to go back to school, she still has to take care of her youngest. So, we’ll have to wait and see,” Marc says. Since Tashi and Marc are both at-risk patients – Marc has already conquered cancer three times – it is also better that they avoid social contact as much as possible. Of course, the study that says children are more contagious than adults isn’t cooperating either.

That’s why social contact is the biggest problem. “Tashi sits every day looking at the door or looking out the window to wait for the PAB assistant. She has become his best friend with whom he has built a very strong bond. I have to explain to him every day that she won’t come and that’s hard,” Marc says.

The problem with social contact is even bigger in the institutions. It was one of the first things that went into lockdown in Belgium, because they are one of the most sensitive people to the virus. So, no visits are allowed there from the beginning of March. As a result, the parents of a disabled child in an institution do not have the chance to explain why they are not allowed to visit. Uncertainty therefore weighs most heavily. When is it allowed to see their own child again? It is a question to which there is still no answer. The anxiety of the parents that their disabled children in these institutions develop a great mistrust towards them is big.

Tashi’s favourite activities are also all gone. “We went to the malls every weekend and not because we like shopping so much… (laughs). Tashi loves elevators. Every time I parked myself on the roof so I could take the elevator down and back up at least twice. I think that tickled his tummy.” The other excursions are also no longer allowed. Marc always went to the supermarket with his son.

So, the only social contact Tashi has left are his mother, her husband, Marc and the physiotherapist. Even the contact with the postman or the deliverer of his special food has been lost. “Now they ring the doorbell and leave the package with the food, we used to have to sign that we’d received it.” Marc finds it very strange that all of a sudden this is no longer compulsory. He also doesn’t have to give the identity card to the physiotherapist anymore. Every time the physiotherapist passes by, he disinfects all places where he has been.

In addition, Marc also has to think creatively every day about an activity he can do together with Tashi. Since he avoids going out with Tashi, he now has to entertain his son with things they have in the house. This way he involves his son in everything he does.

For a person with a disability, it is extremely important that you give him or her structure in a day. Usually they also have a form of autism. Apart from the social contact that is lost, this is the other problem. Because people used to live in the future, it was easier as a parent to tell what would happen on that day. Now nothing is certain and we live from day to day. Many people with disabilities can’t understand this at all. They normally always went to a day school where they got a clear structure every day.

Tashi isn’t just a burden, of course. It’s the person Marc loves most. Marc therefore calls Tashi the source of his inspiration. “I often hear from other people why I don’t try to teach Tashi something. I often find that a strange question, because he has a cerebral palsy now and I think it’s more important to make him the happiest person on earth than to put a pressure on him that he won’t be anything with later on. He also helps me enormously in my thinking process for my architecture,” Marc says.

“Now I will always take the facilities for a building into account. Because not only Belgian care could be better, disabled-friendly buildings would also be more than welcome”. It is clear that Marc is not served with the policy that is happening in Belgium. Certainly not in times of the corona crisis. Indeed, the press conference of 24 April 2020 only focused on the economy. They decided if the figures would make it possible to get people back to work on 4 May. On 11 May, the shops would be allowed to reopen under certain conditions and on 18 May, parts of the schools could be reopened.

Marc thinks this is unreal. “People are going to see their boss before they can see their own mother again.” He’s not the only one criticizing the policy the government is now pursuing. Everyone yearns to see friends and family again. “A human being is a social being. We need our social contact, or we’ll just go under.”

“The future has to clear up quickly, because I can’t keep this up for another two months,” Marc says. The Security Council in Belgium has still not taken a decision on social contact. “They are in the process of negotiating what can be opened up to save the economy, but they are not thinking about what people really need.

Other stories also make it clear that it is not tenable to keep a disabled son or daughter at home for such a long period of time. First of all, you fall without home support and sending their son or daughter to an institution where they then become isolated is not an option either. It is a big dilemma that many parents now face, but for which there is still no solution.