Athens, Greece – Among all the misfortune that has plagued Greek diligences since the beginning of the government-debt crisis in 2009, it appears as though the business of film has offered considerably beneficial prospects for the country’s young generation.

It is late March and spring is beginning to manifest in the Hellenic capital. Despite the city’s excess of abandoned buildings and rundown avenues, signs of optimism are everywhere this time of year. Trees are blossoming, streets are filling in for the tourist season, and nationals everywhere are eager to discover what benefits will arise out of the newly elected left-wing Syriza government.

Within the last several years, young Grecians have been waiting in anxiety for their time to reluctantly accept whichever time-dependent humdrum career opportunity comes their way. However, with the Greek film industry’s consistent prominence amidst all the adversity brought about by the ongoing debt crisis, it seems as though an outlet has opened up not only for the country’s creative youth, but also for the country’s economy.

Out Here, a recent documentary created by the private philanthropic Stavros Niarchos Foundation (SNF), is a noteworthy example of how the Greek film industry has utilized the crisis to help itself stay afloat while simultaneously providing an assessable format to enlighten young audiences about the crisis itself.

For the duration of the film, Out Here presents those who were aided in the midst of the crisis by the SNF’s two €100 million initiatives from the years 2012 and 2013, the latter of which, according to SNF, “aims to address the high percentage of youth unemployment, seeking to create better work opportunities for the young.”

Discussed by SNF and other philanthropists throughout the film is the recent aid of several charitable organizations (i.e. Orange Grove, Impact Hub, etc.) toward Greek citizens. Once an organization is finished being presented in the documentary, statistics are given about who and what has benefited from the organization’s work since the start of the initiative.

According to Anna Kasimati, chairperson of the Creative Europe Media Desk at the Greek Film Centre, documentaries are the most effective film genre when it comes to educating the Greek population about the crisis. “An interest in film increased after the start of the crisis,” Kasimati says. “Images and films in general are very powerful and direct, so it is easy to understand what is happening in a country through film.”

Apart from documentaries, those involved in the making of films from other genres believe the Greek film industry is thriving more so than ever thanks to another form of cinema that has captivated young audiences across Greece and elsewhere around the world.

The “Greek Weird Wave”, formerly known as the “Greek New Wave”, is a label appointed to a string of contemporary cult films that, as claimed by Kasimati, “establishes a point of view and identity that leaves a strong artistic mark and cinematic framework [in Greece].”

Notable films associated with Greek Weird include, but are not limited to, Athina Rachel Tsangari’s Attenberg (2010), and Yorgos Lanthimos’ Dogtooth (2009) and Alps (2011). Such films, described by The Economist as containing “haunting cinematography, alienated protagonists, and absurdist dialogue”, have received numerous accolades, obtaining nominations and victories at the Oscars as well as the Venice and Cannes Film Festivals.

“These types of films touch up on the crisis,” says Aggelos Tsakanikas, assistant professor at the National Technical University of Athens, “There are not so many happy films [within Greek Weird], but more pessimistic films. This is a result of the crisis and the overall environment.”

Indeed the debt crisis is often portrayed in Greek cinema as a visual theme, but few films contain a plotline where the crisis is the central issue. Nevertheless, directors have learned to utilize this theme in order to depict the fluctuating Greek lifestyle brought about by the crisis, and it is inspiring the young generation to enter the film industry.

“It is no accident that a new generation of filmmakers and producers have been employing their knowledge of various fields,” says Kasimati, “They combine their expertise and ingenuity to take advantage of the favorable (or rather unfavorable) circumstances and turn this unprecedented boom into the status quo.”

According to Kasimati, the Greek Film Centre (GFC) aspires to continue being a strong ally to every filmmaker, having offered a total sum of €2.55 million to 100 projects in 2014. “Although the amount of money we receive is not the same as it was in 2008, the organization still funds films in regularity.”

Kasimati states that the GFC strives to cover every aspect of filmmaking from preproduction to advertising, while simultaneously “funding new directors and ensuring equal opportunities for expensive, low-budget, and artistic projects.”

Similarly, the Hellenic Film Academy (HFA) has ascertained its own method of encouraging youth in Greece to seek a career within the film industry.

Founded in Athens in 2009 as a union of Greek filmmakers from all domains, the HFA specializes in “leading initiatives toward the development of domestic film production.” In 2012, the HFA created the annual Film Factory as a series of free public training workshops directed toward young professionals, students of cinema, and anyone else willing to train his or herself about cinematic creation and interpretation.

Linking film to the economy

As a matter of fact, it may be in Greece’s best interest to let organizations provide opportunities for young adults to follow their creative dreams, because the film industry, as it turns out, can be vital for Greece’s economic growth. 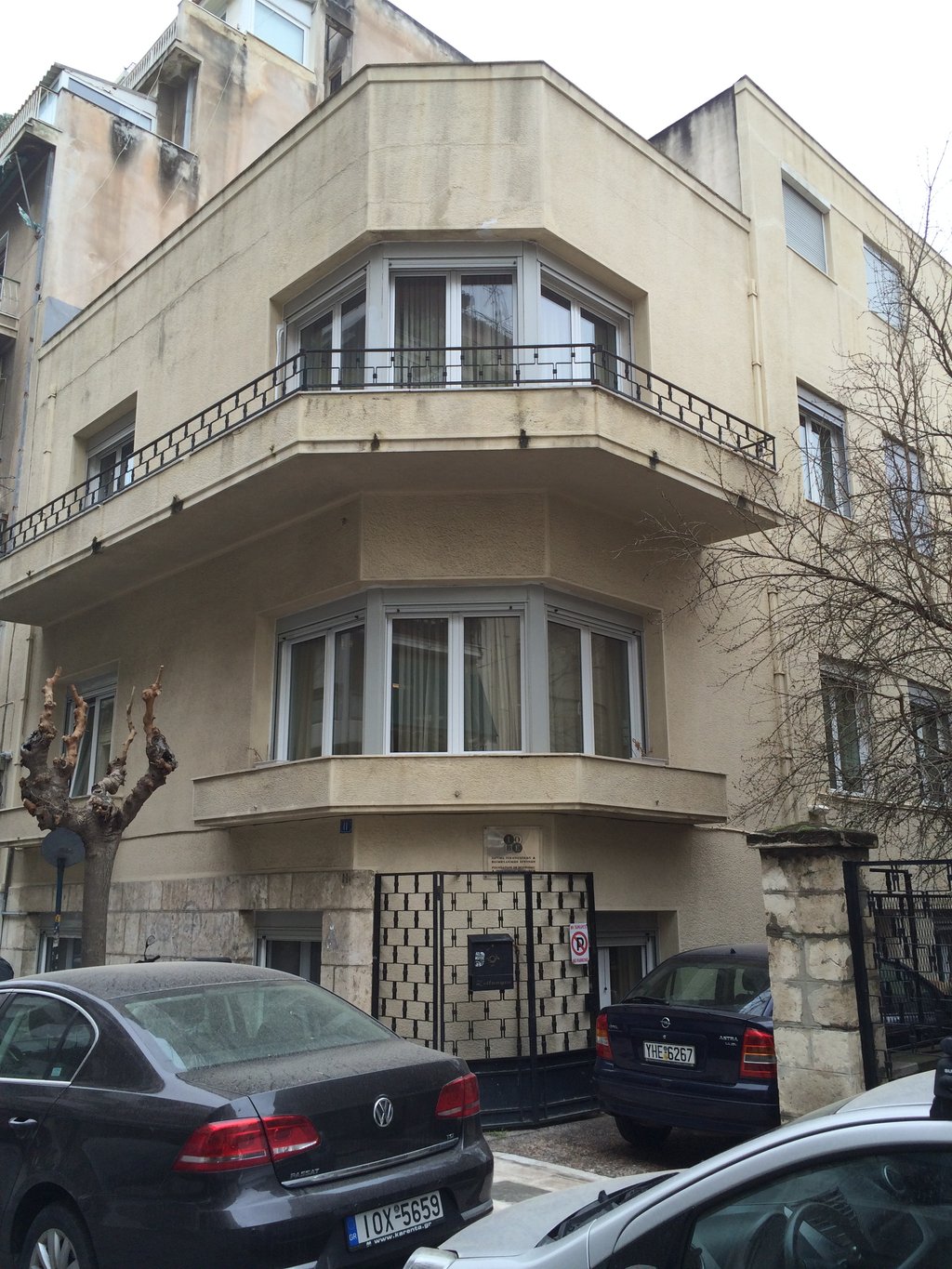 In addition to shaping the audiovisual landscape of Greece, the HFA is also known to conduct studies and action plans for the enhancement of Greek policy on film, the most recent of which was released in late 2014 after a collaboration with the country’s very own Foundation for Economic & Industrial Research (IOBE).

“[IOBE] is a private, nonprofit think tank, so we are not funded by the state,” explains Tsakanikas, who, on top of his job as an assistant professor, is also IOBE’s scientific adviser, “We carry out studies with various associations (e.g. the food or manufacturing industries), but one of the main aspects of our research is, especially at this time during the crisis, to find sectors of the economy that can attract investors and money from abroad.”

According to Tsakanikas, the HFA came to IOBE in 2014 to fund a study measuring what the economic impact the film industry is in Greece, and what kinds of barriers are preventing the industry from attracting more productions, both domestically and internationally.

“This is the first time this kind of study has been undertaken by an economic institution,” says Tsakanikas, “And we try to implement our economic principles to study this sector…and aim to highlight its activity and importance.”

Elaborating on the 2014 study, Paratsiokas explains the legislative framework that went into the IOBE’s research – checking if there are any restrictions inhibiting foreigners from filming productions in Greece. “And then, to enrich the study, we made statistics on this issue to see how much impact it will have on the economy and if other foreign productions will contribute their money to the Greek economy.”

When presenting the results of the study back in November, Tsakanikas stated that producing 20 Greek films annually with an average budget of €450,000 could turn a profit of €14.2 million for the country’s GNP and create 272 new jobs within the film industry. When adding into account the audiovisual sector, plus the television and commercials produced that year, the numbers exponentially increase to €686 million and 12,000 jobs.

In addition to creating tens of thousands of work opportunities for young adults hoping to become a part of Greece’s film sector, the study also determined benefits that could be (and have been) brought to the country’s tourist industry, with Paratsiokas referring to the industry as “an advertisement for Greece in order to attract visitors.”

Distinguished by Tsakanikas and Paratsiokas as prime examples of films that have contributed to Greece’s tourism are Captain Corelli’s Mandolin (2001), and Mamma Mia (2008), which led to a 15% increase in foreign tourists in the years following the release of the films.

Of course where pros exist in high quantities, there are also cons. “We have a lot of actors in Greece. Perhaps too many,” explains Tsakanikas, “Even before the crisis began, many more people than anticipated decided to work in this area…and a lot of people believe they can be directors as well.”

Tsakanikas says that Greek directors face a particular challenge within the film industry. “Greek films are rarely translated, so it is very difficult to attract big foreign audiences… Films can be shot in English, but filmmakers want to stay in touch with Greek audiences. Because of this, Greek directors have problems marketing themselves.” Paratsiokas adds that this quandary can lead to directors struggling to find endorsements.

While the pursuing an acting or directing career in Greece may prove strenuous even during a time when film is so prominent, Tsakanikas gives optimistic news for other positions in the film industry, claiming, “We have a lot of engineers and software developers now thanks to the new techniques in film and television production.”

“And such is the case with advertising,” Paratsiokas adds, “because these things are linked. The film industry is very closely related to [these markets], so this may be a direction for young people involved in technician industries and things like that.

As the interview comes to an end, I ask if IOBE has imminent plans to perform any further studies in regard to film, to which Tsakanikas and Paratsiokas respond with a simple “no,” but make clear IOBE’s intention to remain in touch with film associations.

“[Film] is not the biggest sector in Greece, but it is something that can create value beyond just the sector,” says Tsakanikas with sincerity in his voice. “It has positive benefits and spillovers in other sectors and in the image of our country, so it is not just for young people. It is value that can be brought from the regional level up to the national level.”

As I leave the building’s conference room after saying my goodbyes to the two men, Paratsiokas suddenly stops to inform me of something, as if he had forgotten about it until just now. Indeed, he tells me a study of the impact of piracy on the film industry has been up for discussion. Himself acknowledging that this is not specifically a Greek issue, it is nonetheless an interesting subject of research, just so long as the IOBE finds funding from somewhere.