Poznan, Poland – Ania (17) is growing up in a country that is changing fast. Poland is an express train, steaming away from the grey stereotypical Eastern-European image, shaking off the remnants of the iron curtain at high speeds. When Ania was seven years old, Poland joined the EU. Highways and city development programs changed her world.

But some parts of Ania’s world are islands of rest. While her father travels the world consulting for international companies and her mother works full-time as a midwife, her grandparents offer a safe and warm home. They share in the financial and educational guardianship.

Meat on the table, a cat that Ania calls her own, a joyful seven-year-old cousin, a silent place to study hard and a bed: a warm nest to find comfort in tradition. 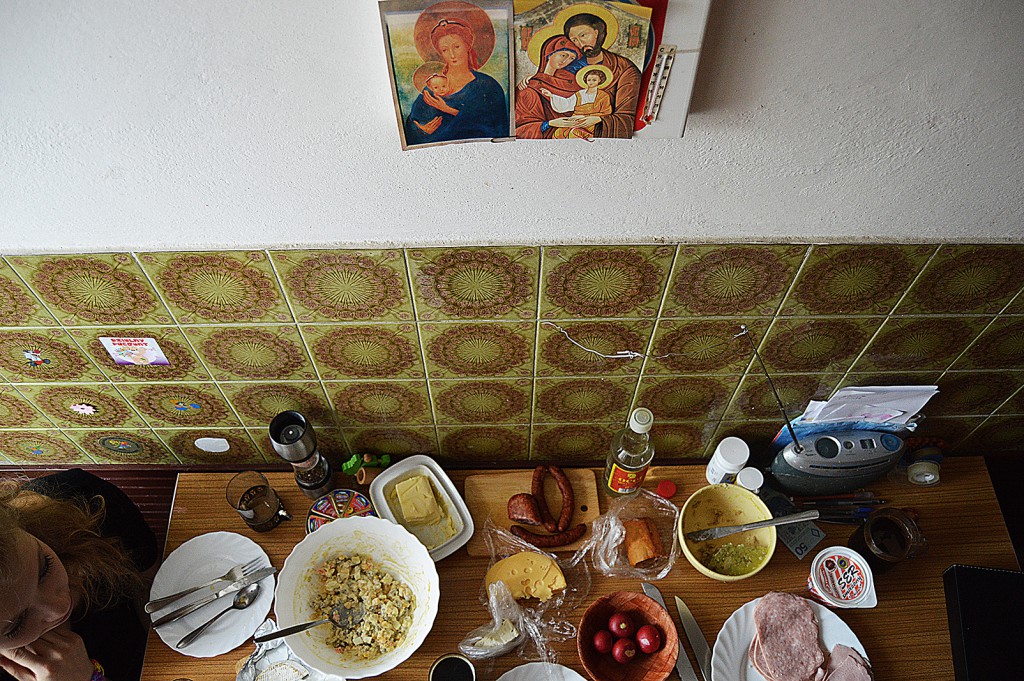 The breakfast table covered with abundance of cheeses, eggs and meat of all sorts. Grandma spares no expense preparing the same breakfast three times: once for her husband and herself, once for Ania and once for the youngest, Paulina. 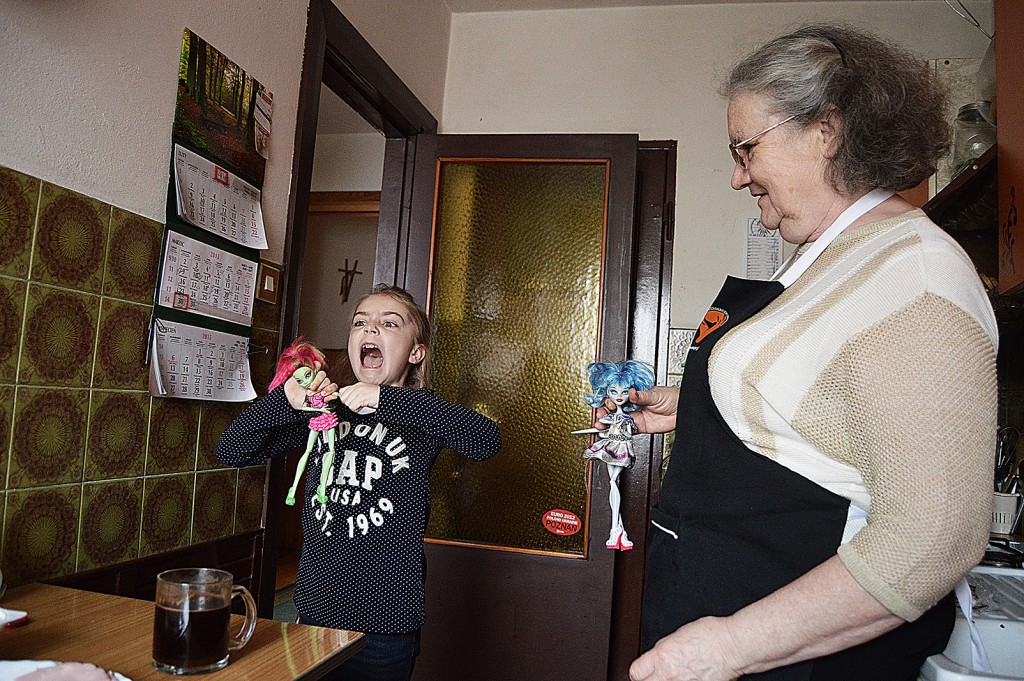 Grandma has a hard time keeping up with all the latest toys laying around in the house. “My Little Poney now has legs instead of hooves”, Paulina shouts. 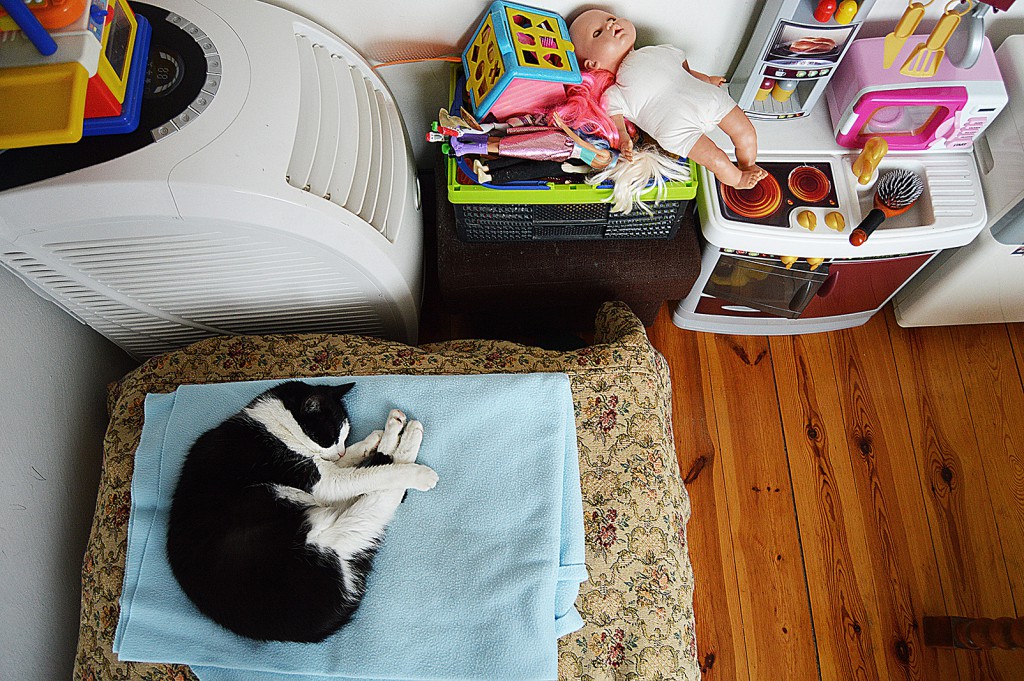 Grandma’s room – that serves as a toy storage room as well – shelters the house cat from the shouts of the youngest grand daughter. 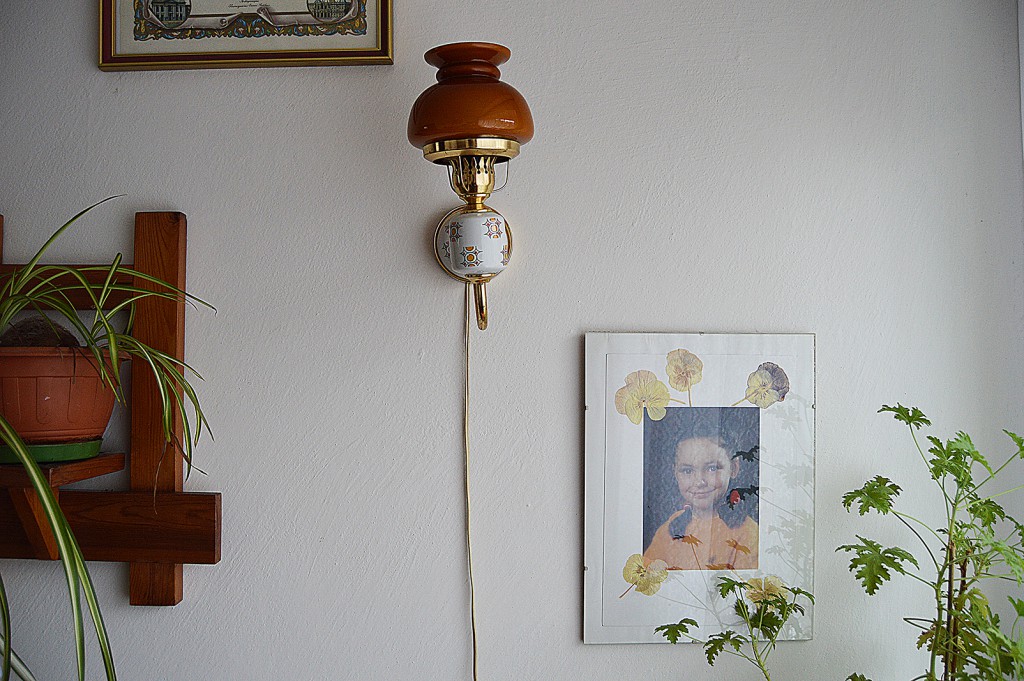 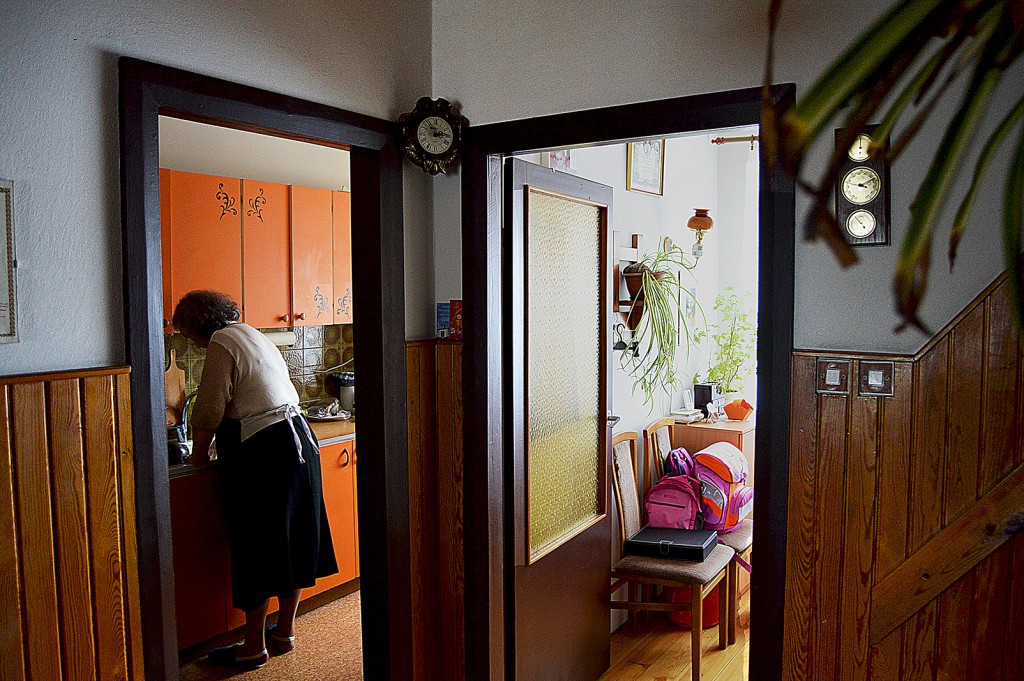 A warm meal takes time. Irena is in the kitchen for hours to prepare lunch for her grandchildren while their parents are at work. 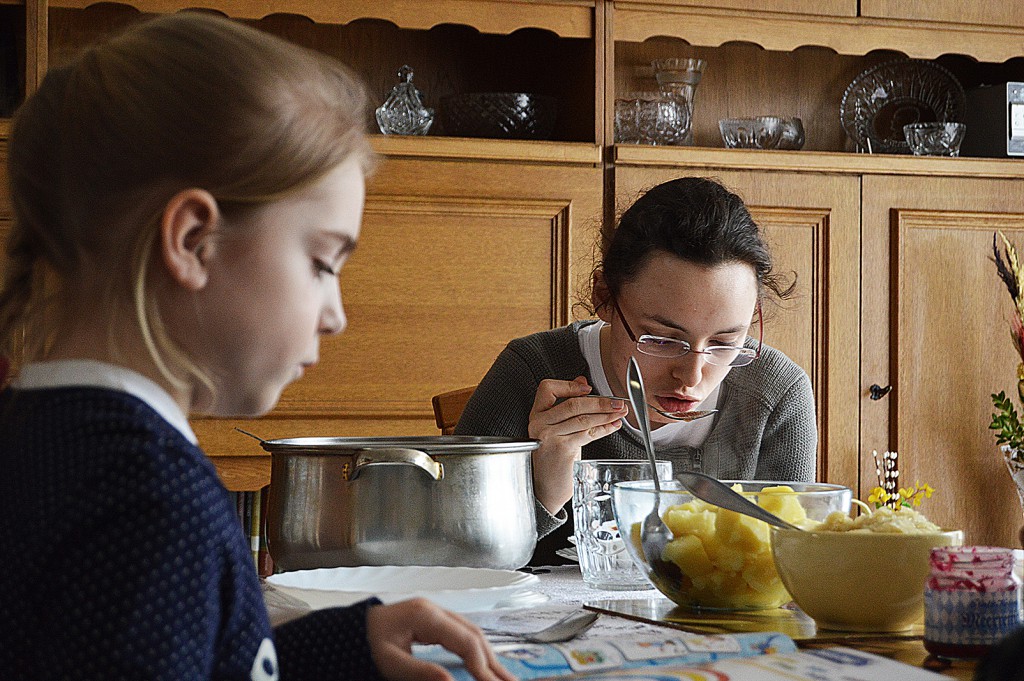 “You must eat well – eat more – eat more”, grandma insists while Ania eats a soup and Paulina looks through an instruction book for colorful animals and flowers out of rubber bands. 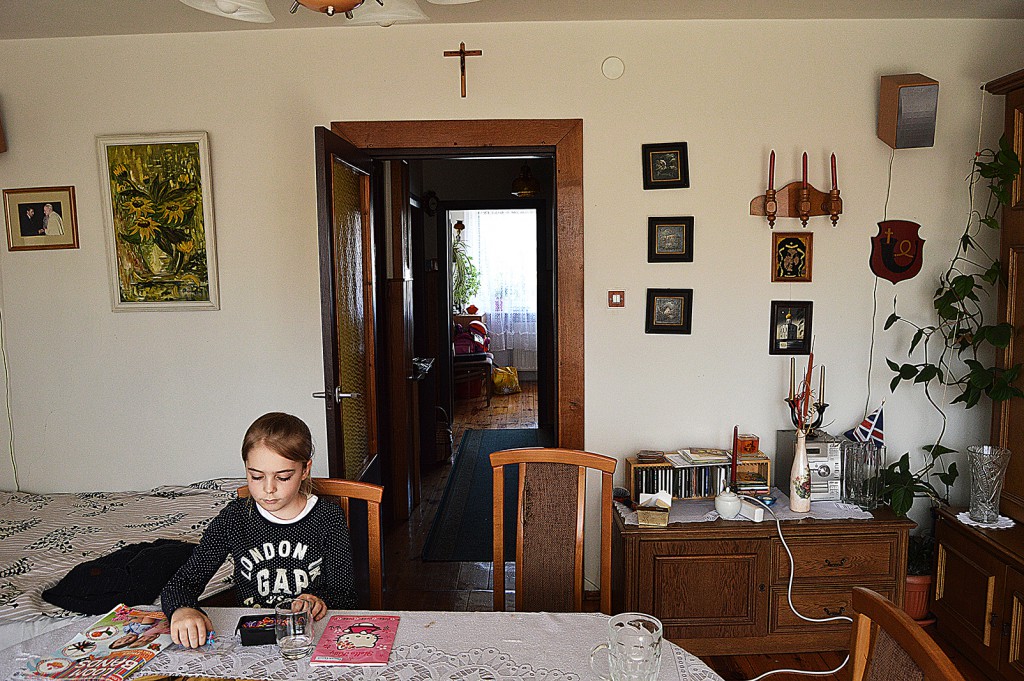 While Ania is upstairs, studying, her little cousin finishes the bracelets she will proudly present to the family later. 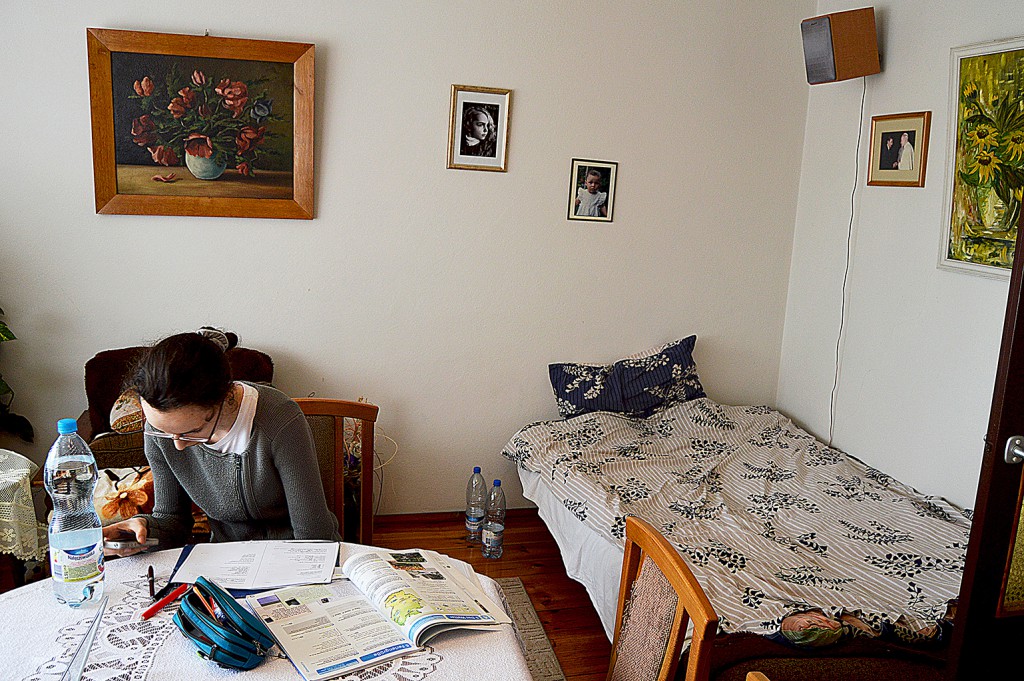 Ania moves her studies downstairs when Paulina is at English classes. Rest has returned. 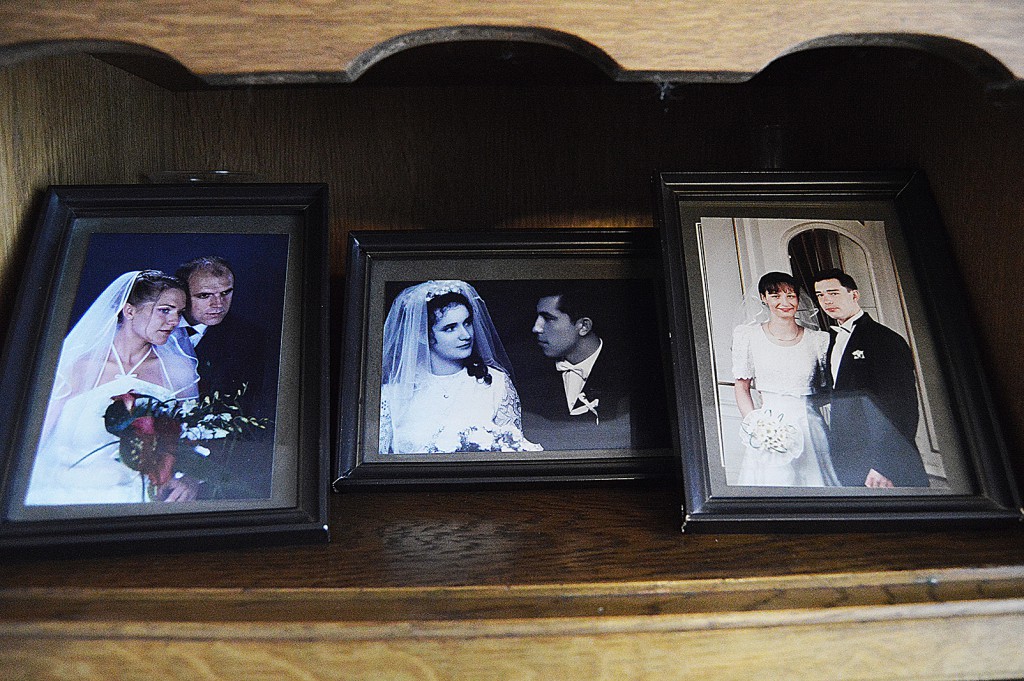 Left to right: Paulina’s parents, her grandparents and Ania’s parents at their wedding day. 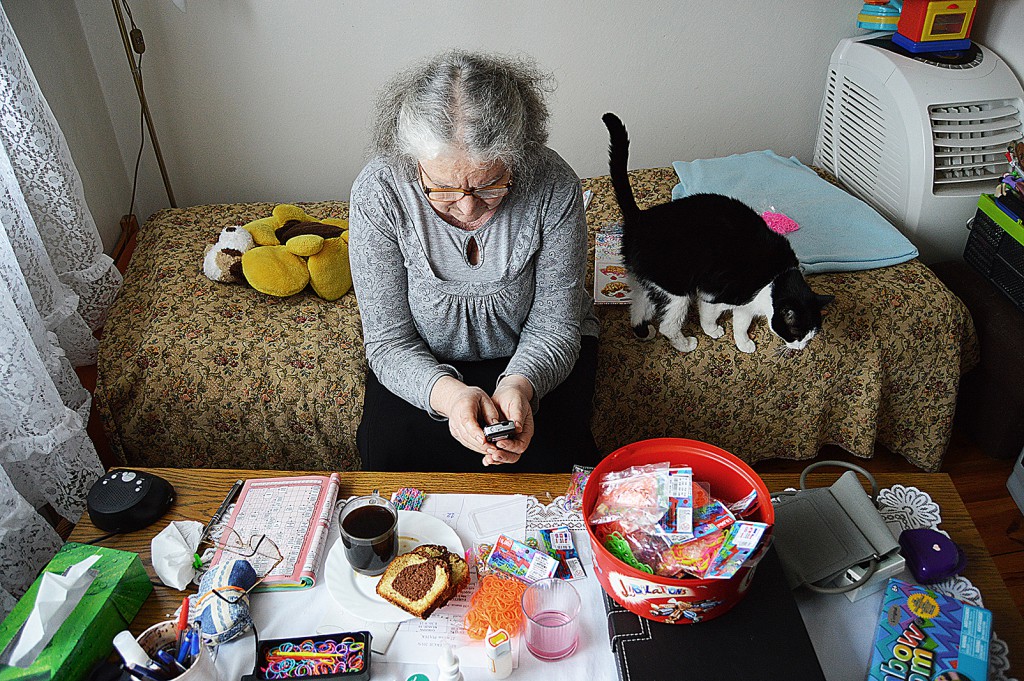 Grandma, in a moment of rest, sends one of her many relatives a text message. “You won’t hear my ringtone a lot, people rather call the house phone.” 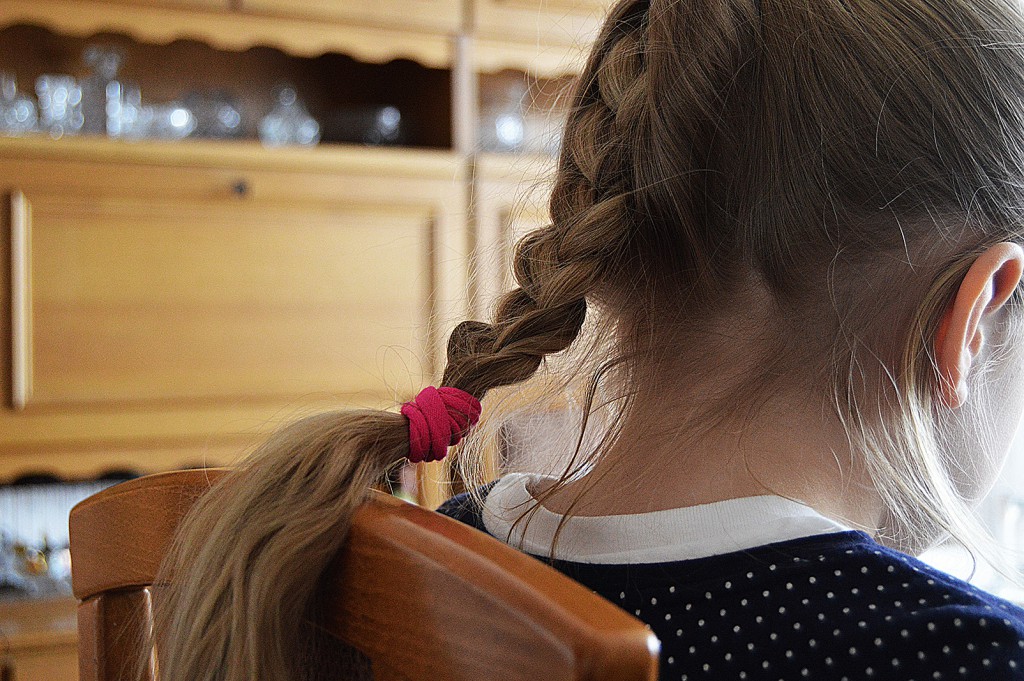 “Grandma braided my hair”, Paulina says when she gets back from class in the afternoon. 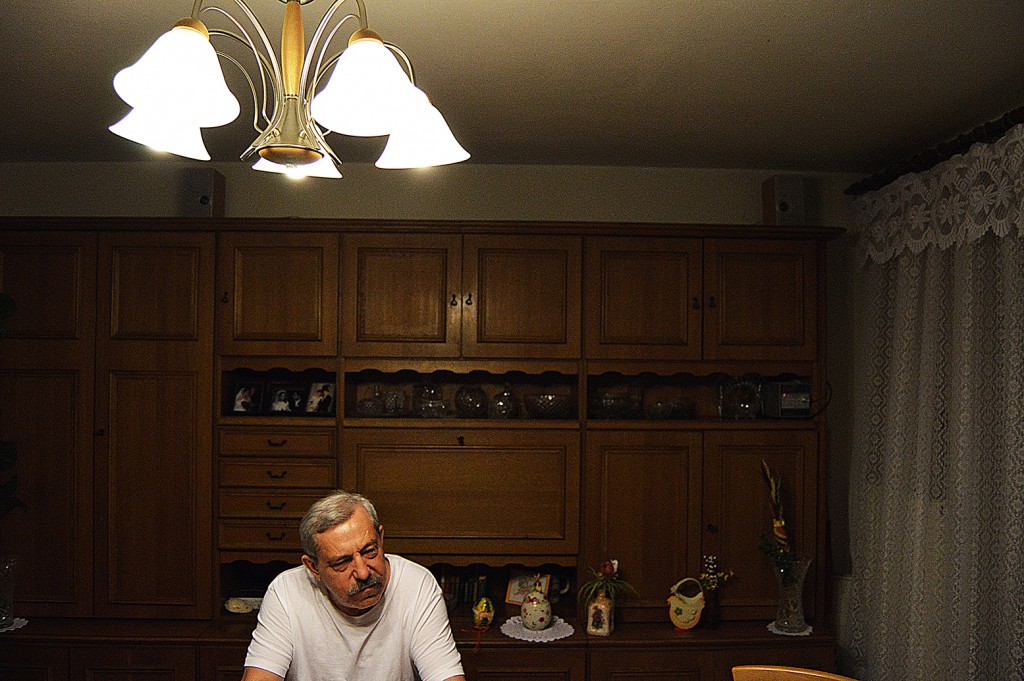 In the evenings, the family doesn’t have a warm meal again. Grandpa enjoys some peace before he moves upstairs to watch television and check his e-mails. 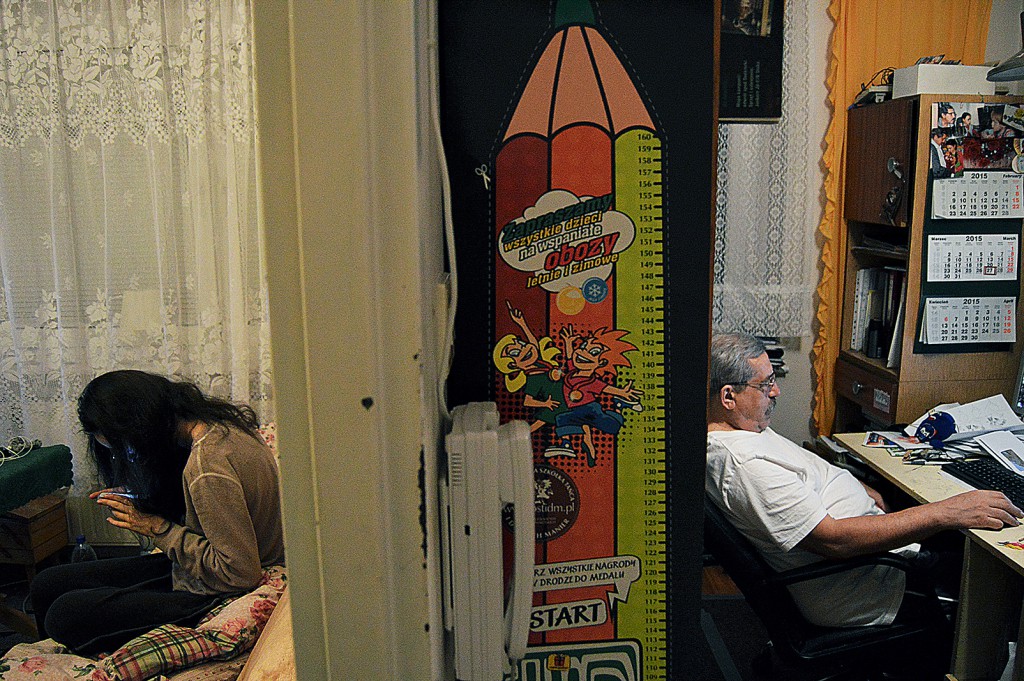 Ania looks at her iPhone screen, while grandpa browses the desktop in the neighboring room. During the day the family is constantly together between the dining room and the kitchen. In the evenings, everyone looks for some privacy elsewhere. 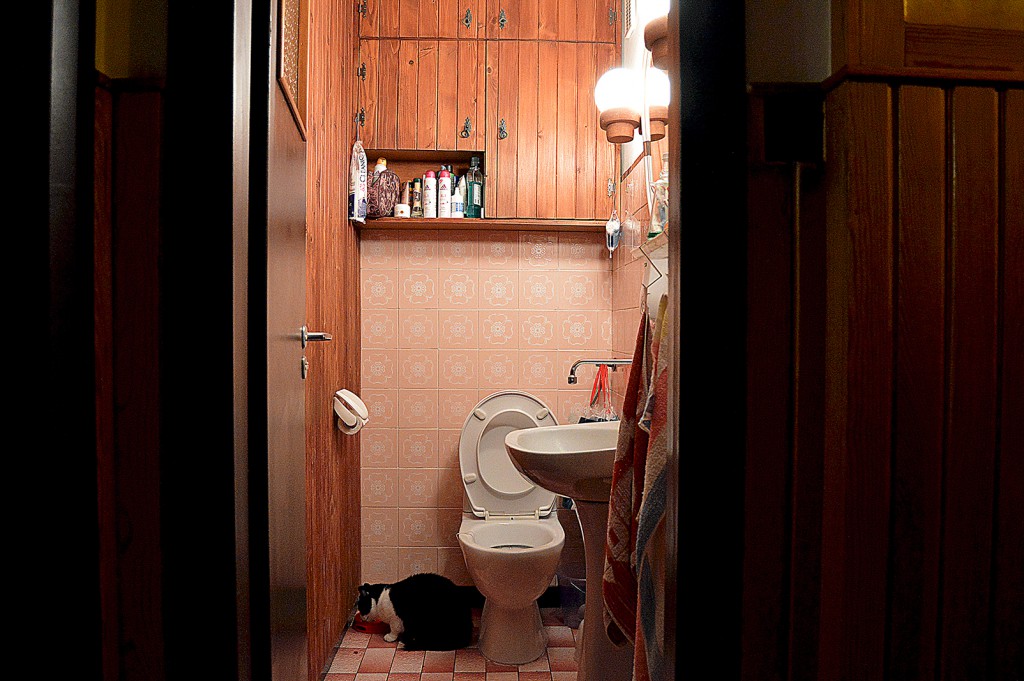 The cat feasts on its dinner in the downstairs toilet. 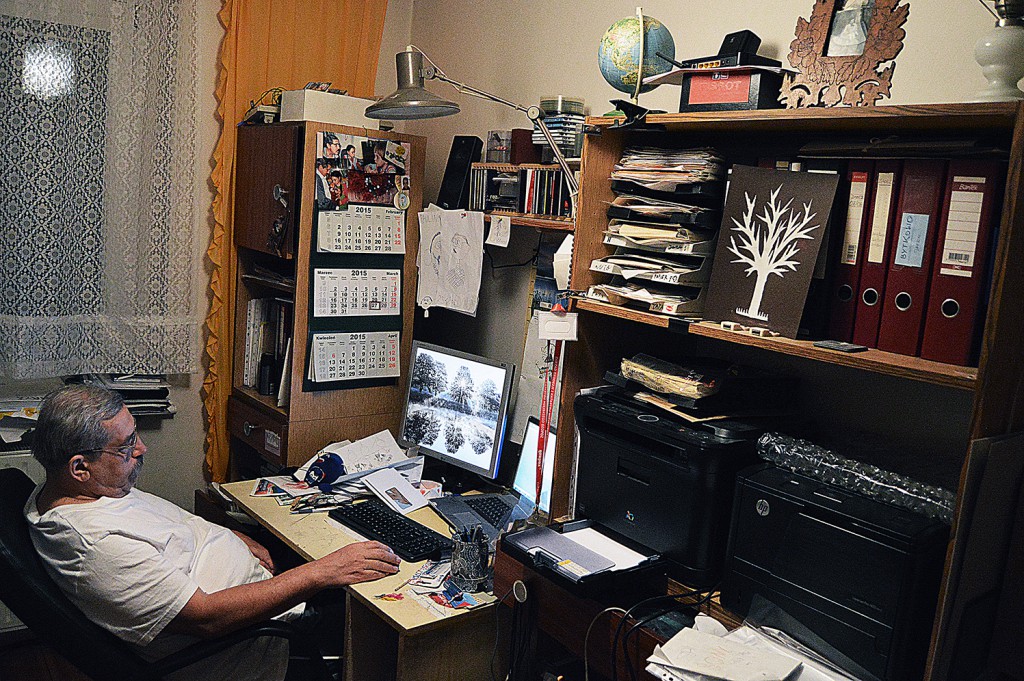 After the grandparents watch some tv together, Grandpa moves to his study. “I am no longer involved in politics, but I want to stay informed. Everything is online now, so I don’t need a newspaper.” 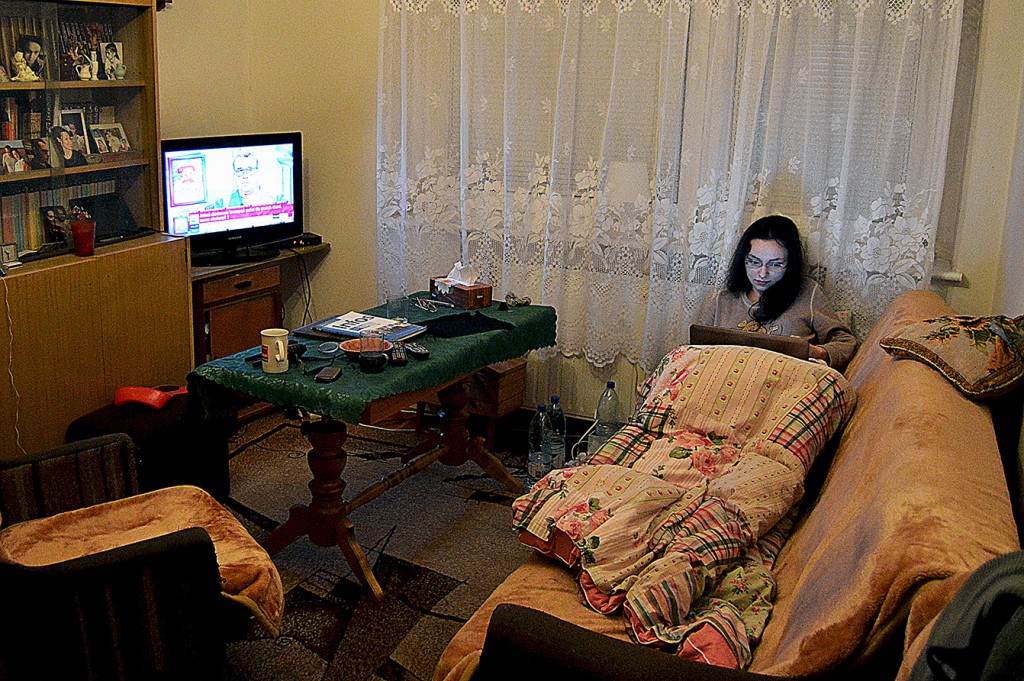 Ania nestles herself in her couch-bed after her grandparents have left. The ongoing debate on tv doesn’t distract her. 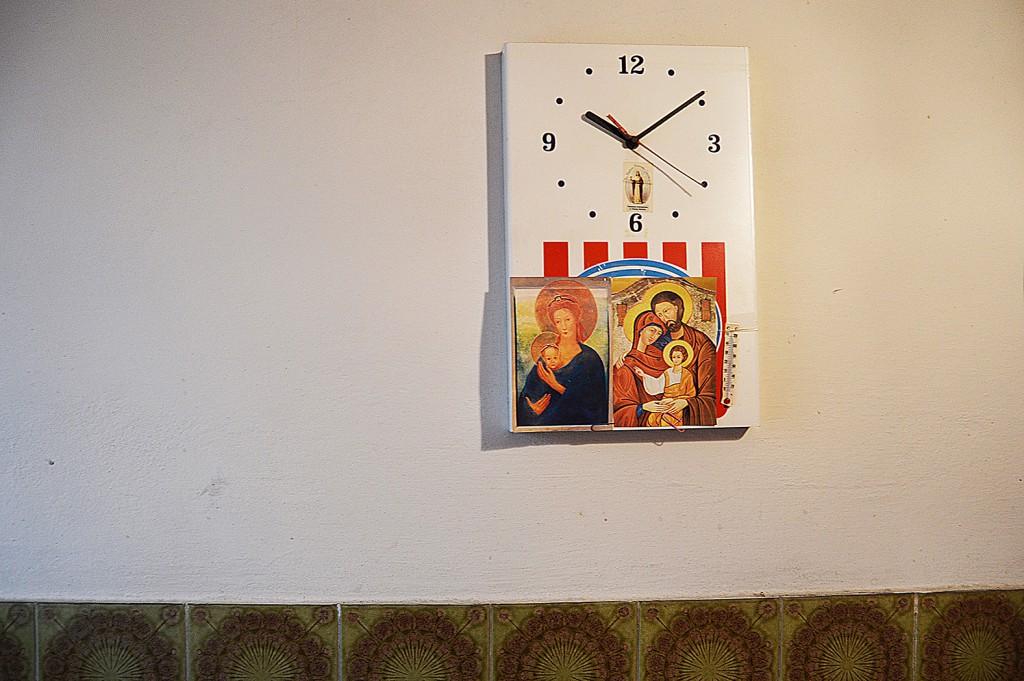 The next morning, Jesus and his family are still there, watching this Polish family start the ritual again.