The limitations placed on freedom of speech in Spain also include journalists. The issue of press freedom is a silenced concept that often manifests when a “small fish” is put on display. 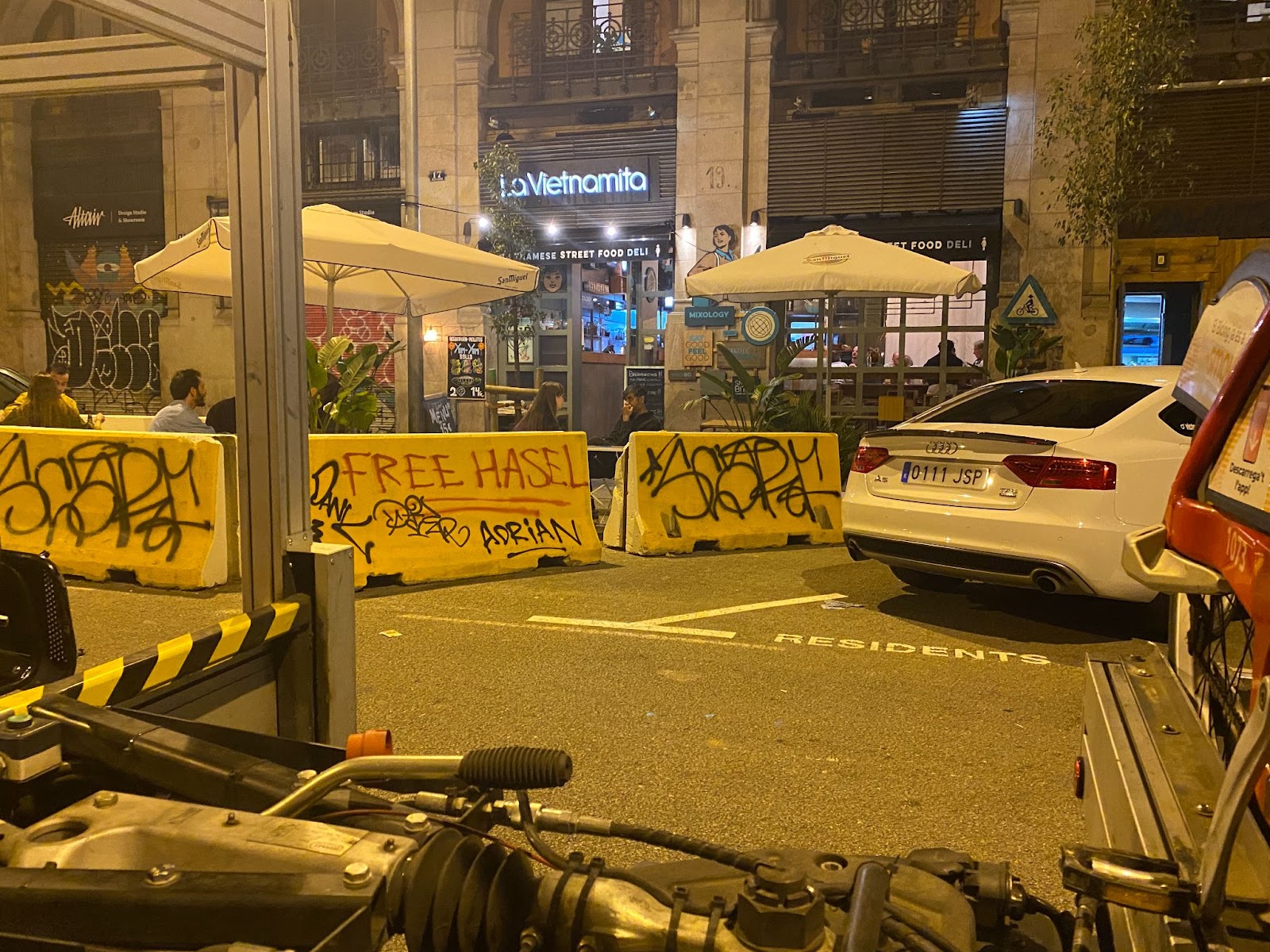 Pablo Hasel is the ‘small fish’ of Spain used to set an example. Photo by Ashante Ford

“My daughter had lost her keys to my house last week and I was thinking- oh my god, someone is going to come to my house and do something to me because this is happening in Spain. I mean, there are some journalists that have found their houses broken into…” says Virginia Perez Alonso, the editor-in-chief of Publico news in Spain and president of the Platform in Defense of Freedom of Information (PDLI).

Tension in Spain accumulates as journalists have to make the decision between honest coverage, their safety, and a sustainable income without consequences. Press ‘freedom’ starts to become conceptual as external factors begin to obscure the practice of ethical journalism.

After the arrest of the Catalan rapper Pablo Hasel in February,  a chain reaction of events involving journalists in Spain occurred. During the months following his imprisonment, the protests that followed led to four media freedom alerts in Spain. 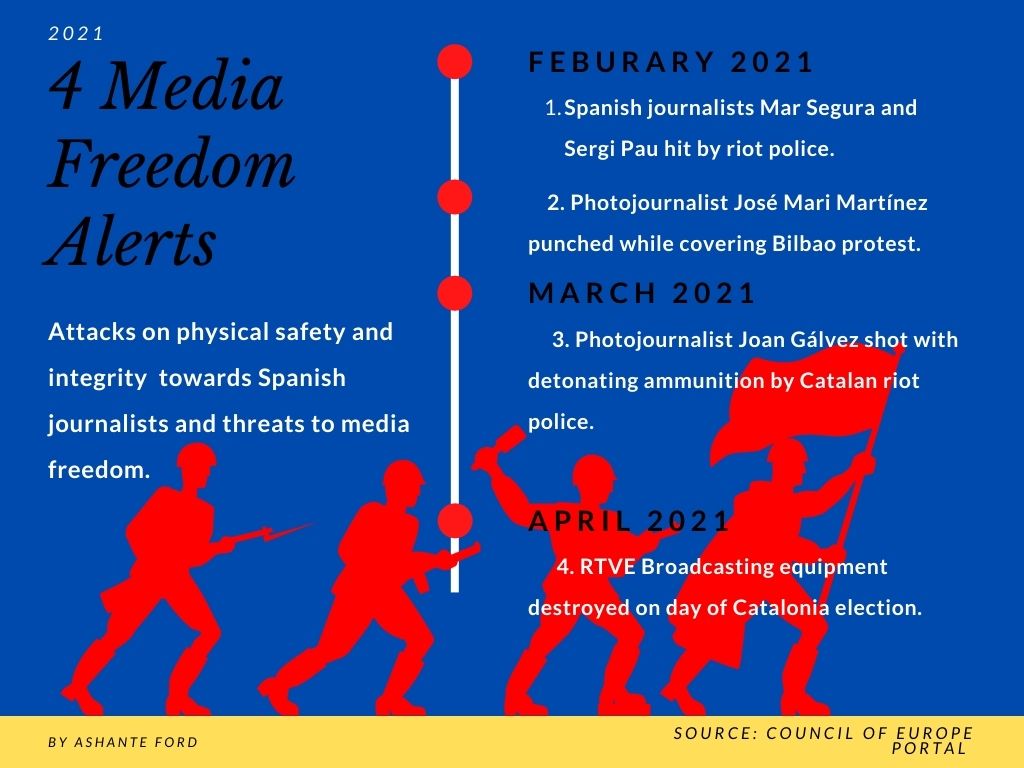 (This is an active graphic of the hyperlink attached above)

The concerns involving press freedom in Spain and Europe at large, are growing because of censorship and consistent threats to journalists in their professions. According to Freedom House, in Spain there is a growing tendency by the authorities to override the protection of journalists’ sources and to obstruct investigative journalism.

“We have several problems in Spain and laws being approved since 2015 that restrict freedom of expression. We have been fighting for these laws to pass away and there is political commitment with that, but they don’t really end up doing anything”, explains Alonso.

Following these restrictive laws, the EU Commission endorsed a study that analyzed the threats to freedom of speech and press in Spain. In response to this study, on July 23rd, 2020, the Vice-President of the Commission for Values and Transparency, Vera Jourova, stated that: “We need to better protect journalists and to increase transparency and fairness in the online world.”

“I became a journalist because I believe that journalism fulfils a crucial role in society. As journalists, we have a responsibility to provide useful information and guidance that citizens require to understand public affairs and to participate in the community on an informed basis,” states Dr. Xavier Ramon.

Dr. Ramon is the assistant professor in the Department of Communication and Head of Journalism Studies of Pompeu Fabra University in Spain. He believes that it is essential to train new generations of journalists about the importance of ethical journalism for democratic wellbeing.

With that being said, it beckons the question of:

“How can ethical journalism be achieved in Spain when the journalism profession itself is often obstructed by stringent laws?”

For example, the Citizen Security Law- more commonly known as Gag law. This law was approved in March 2015 and is still without reform today. It first prevents the glorification of banned groups, as well as insults against religion and monarchy, then establishes penalties for tweeting calls for demonstrations or protests, and prohibits the publication of photos of police officers.

Recently in France, journalists and activists used this particular Spanish law and experience to stop a legal reform headed in the same direction.

Another law in place worth mentioning is the Royal Decree law that was approved in 2019. With this law in place, the government can allege “reasons of public order” to intervene in any infrastructure, associated resource, or network level.

To wrap up the primarily relevant laws that cause obstruction for journalists in Spain, the New Sinde Law is a reform of the original Intellectual Property approved in 2019 which hardens the law– further reducing the roles of judges and allowing the government to close web pages without judicial authorization. For example, this reform will allow platforms such as Google to censor content without requiring prior judicial approval. Spain has until June 7th, 2021 to transpose this European copyright directive.

“Overall, it can be stated that Spanish journalists are free and safe to carry out their work. However, as it happens in many other nations, Spanish journalists do not operate in a vacuum. They develop their task within a larger system which, at  many times, makes them vulnerable to external interference.

Apart from this, journalists face other subtler obstructions to their work. Restrictions to press freedom are frequently imposed by certain political parties and governmental institutions. Those include the banning of journalists, limitations to ask questions in press conferences or the difficulties to access public data,” says Dr. Ramon. Journalists have the right to cover this
According to the Threats to media freedom in Europe Annual Report for 2021, there was a record number of physical attacks, as well as harassment and intimidation inflicted upon journalists. Incidents concerning rallies and demonstrations are common themes in Spain. 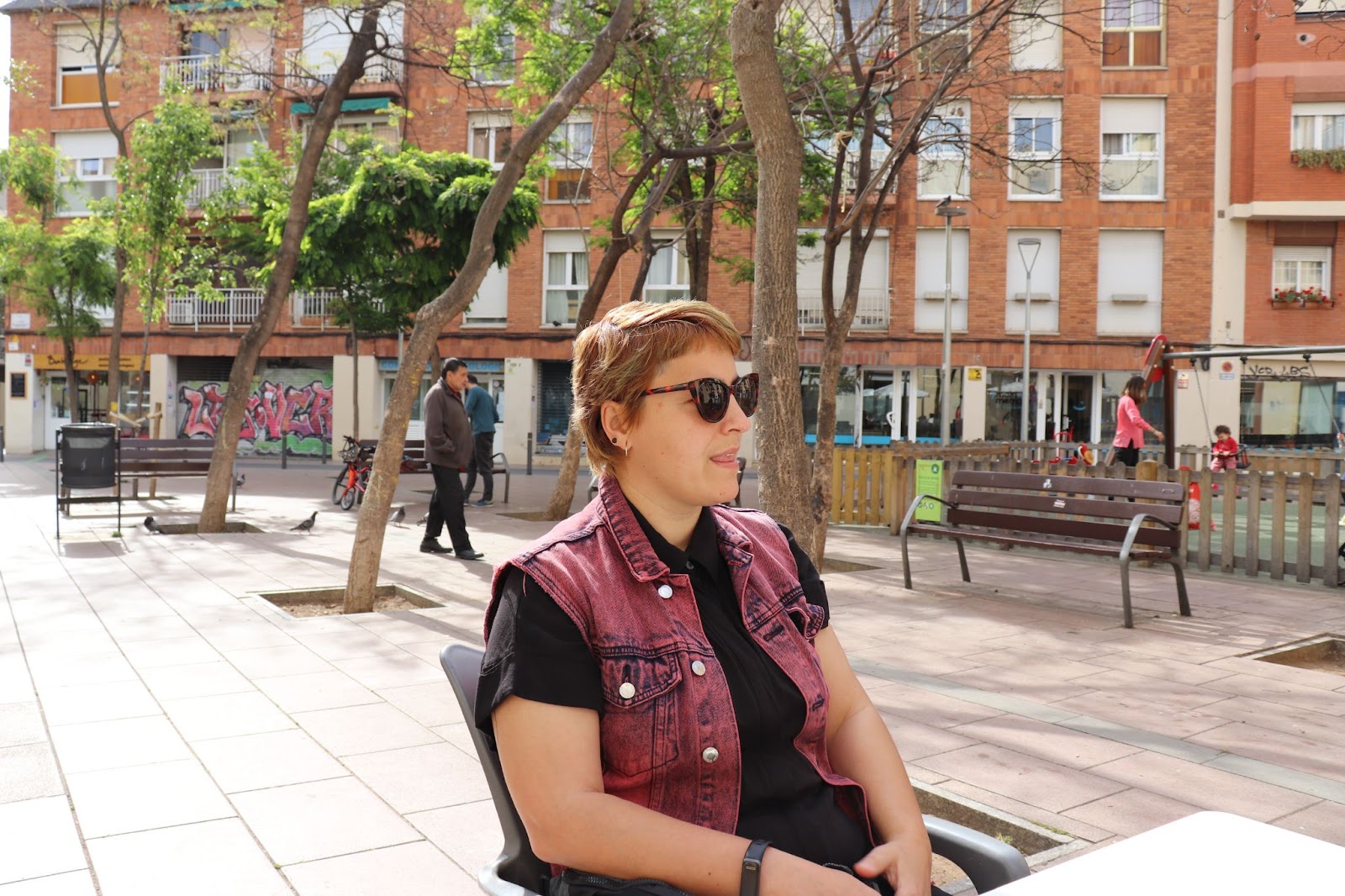 Lea Beliaeva Bander is currently a freelance journalist, writer, teacher, and host of the podcast “Catalonien Indefra”, based in Barcelona, Spain. Bander has her Master of Arts (M.A.) in Spanish Language and Culture, with a concentration on Cultural identities in Europe from Copenhagen University. Her area of expertise lies in modern Spanish history and Catalan history concerning culture, society, and identity.

In a recent report from the Council of Europe, Spanish journalists Mar Segura and Sergi Pau were hit by riot police while covering protests against police violence and the arrest of the Catalan rapper Pablo Hasel.

The Spanish authorities replied to this report in a letter consisting of nine key points.

In point number four, they state that:

“The journalists who denounced the alleged facts through their professional associations did not carry the external identification elements corresponding to their professional work (‘Press’), as indicated by the regulations for this purpose. Therefore, it would be difficult to differentiate who are journalists and who are not in a public disorder situation.”

“Safety of journalists covering protests stating that “good Practices for journalists include several steps: journalists should wear clothing and credentials that allow them to clearly distinguish themselves from both protestors and the police”.

The modality of these laws allow the interpretation of them to become complex. The limitations placed upon journalists in Spain can create clear tension between safety and honest coverage.

A History of Silence
These stringent laws regarding people and their professions stem from the strong dictatorship past in Spain.

During the Spanish Civil War which went on from 1936 to 1939, General Francisco Franco ruled Spain as a dictator. Under his rule, he executed multiple groups of people such as prisoners, Republicans and soldiers in wake of the Nationalist regime.

In 1975, Franco died and Spain began its transition to democracy. Upon the foundation of this democracy, the Spanish Amnesty Law of 1977 was brought into existence on a “pact of forgetting” and a bipartisan amnesty to all the crimes of its dictator.

Although the authoritarian behavior cannot be compared to the time under the dictatorship, Lea Beliaeva Bander explains that it is an expression of the fact that the political right has never taken a stand against the past:

“You cannot understand what is going on if you don’t know about the history or the root of it”.

After the dictatorship ended in 1975, the government installed a king as head of state and didn’t let the people decide for themselves. Instead of cleaning up properly after the dictatorship, an oblivion pact was made with the purpose to delete the past from the collective memory.

The Democratic Memory Law introduced in 2020 is an extension of the Historical Memory Act of 2007.  It has a purpose of honoring the victims of Franco’s dictatorial rule and aims to ‘uncover the truth, justice, dignify the victims, ensure forgiveness and the co-existence of Spanish people.’

“What Spain did then and still does, is put in a lot of laws. And these laws have the purpose of leaving the past of dictatorship as it was, and if you do decide to talk about it critically, it will have consequences for you because with laws you will and can get convicted,” Bander explains.

Declining Trust in Media: honest coverage in Spain coupled with many mistakes
In a similar vein to other countries, Spanish citizens’ trust in journalists has decreased in the past years. According to the Digital News Report from the Reuters Institute for the Study of Journalism, only 36% of the surveyed Spanish citizens trust news. Another study, the 2020 Edelman Trust Barometer survey, highlights that citizens in 16 markets –including Spain– don’t trust the media and their professionals.

“Reasons for this  declining level of trust include: the rising politicization and polarisation of media, the overreliance on official sources, the prevalence of commentary-oriented journalism, the errors committed due to the ‘ASAP’ journalism and the hyper-acceleration of news cycles, the expansion of practices such as sensationalism and click-baiting, and the problematic spread of disinformation through media platforms and messaging apps,” Dr. Ramon adds.

Following Dr. Ramon’s observation of the 2020 Edelman Trust Barometer, the most recent survey in 2021 depicts a similar verdict regarding distrust in Spanish media.


The next steps
Media freedom is an ongoing conversation in the European Union. Issues in this regard not only affect Spain, they also currently affect Poland, Hungary, and the Czech Republic.

“The preservation of media freedom and pluralism is absolutely necessary and is the foundation of our democratic systems. Any attack on these principles is an attack on the pact that unites the European Union.

We must not forget that the safety of journalists is a fundamental precondition for press freedom, but one that remains fragile,” states Thierry Breton.

In his speech delivered to the European Parliament’s Committee on Culture and Education on April 19th, EU Commissioner Thierry Breton  raised for the first time the prospect of passing a European Media Freedom Act. The Media Freedom Rapid Response (MFRR) welcomes this idea and was also advanced by European Commissioner Vera Jourova.

Since this proposal however, on May 3rd it was decided that the plan for the ‘media freedom act’ is being postponed until next year.

Olivia Elisabeth Yderholm
8 June 202110 June 2021
In the beginning of the year, the Spanish 'mouth curve law' proved once again to be an effective weapon for censorship...