By Johana Kofronova and Marie Gross

Warsaw at the end of November 2021, the sky is grey, it is snowing. In a side street in the centre near the main railway station is the office of “MIŁOŚĆ NIE WYKLUCZA”, the “Love does not Exclude Association”, one of the largest NGOs in Poland that campaigns for the rights of the Polish LGBT+ community.

From the outside, you wouldn’t expect to see such an organisation in the brown, run-down house, and you also look in vain for the LGBT community’s identifying sign, the rainbow flag, on the doors or windows.

But when you enter the office on the second floor, the view changes immediately. As soon as you enter, bright colours light up the room, a rainbow flag hangs on the wall in the entrance area and many colourful flyers are ready to take away.

This is normally the workplace of the staff of the “Love does not Exclude Association”, but due to the Covid-19 pandemic, most of them are in their home offices and only Hubert Sobecki, one of the three founders and chairman of the organisation, can be found there. 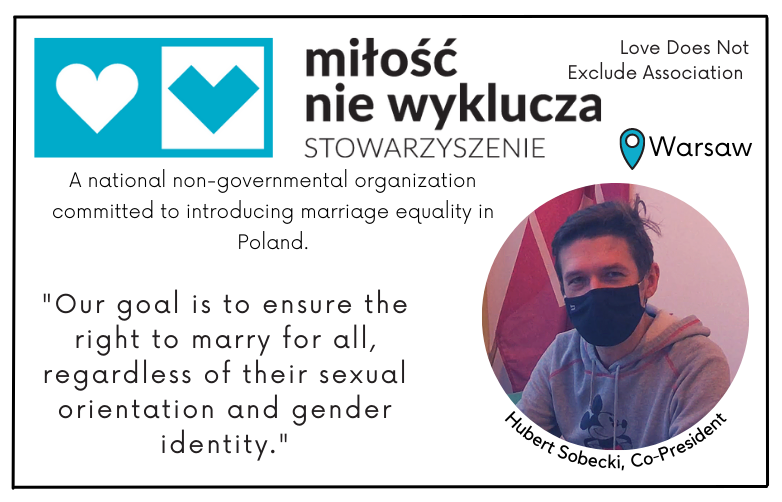 Life for LGBT+ members has never been easy in the extremely Catholic Poland, but with the first election of the “Prawo i Sprawiedliwość”, or PiS party, as sole government since 2015, the situation is getting worse. While it seems that the other EU countries are making steady progress towards equal rights for all partnerships, Poland has been taking steps backwards ever since.

In recent years, many EU countries have legalised same-sex marriage, which is currently possible in 16 member states and is also to be introduced in Switzerland from 2022. In Poland, however, homosexuals do not even have the right to a registered partnership, let alone marriage or to adopt children. But not everyone wants to take this lying down and tries to use their means and possibilities to draw attention to the problems and fight for their rights.

Hubert Sobecki, sitting on one of the two colourful sofas in the office lounge and drinking coffee, says: “10 years ago, together with my boyfriend, I came back from Amsterdam, where I did my masters. We came back to Poland and after one year living here, we became super depressed: ‘We need to leave this place, it’s terrible, nothing is going to change.'”

But then they decided on a different path: “But the other way of doing it is to change things for yourself.” So about six years ago, he founded the “Love does not exclude Association” together with other affected people with the idea in mind:

“The sooner we start talking about full equality, the sooner people will learn that there’s nothing to be afraid of.“

One of the most important successes’ of the organisation was the signing of an LGBT+ charter by Warsaw Mayor Rafał Trzaskowski, a list of concrete points for a city to implement. The reaction to this, however, came quickly from the government and its right-wing conservative supporters, as told by Hubert.

It can be said that around this time the term LGBT+ ideology was also coined by the government. In addition, several Polish municipalities, provinces and counties declared themselves “LGBT+ Ideology Free Zones” shortly afterwards.

These zones are not legally binding and for many these declarations may not change anything, yet Hubert Sobecki describes that one can notice a kind of “chilling effect” “And it is very real in small towns where you have 20,000 people and everybody knows everybody. If you are a public servant in the zones, you have a very tough choice of allowing LGBT+ events to take place in your small town or not. You know that your politicians in the region voted for this resolution, you therefore know what is expected from you.”

In addition to trying to win over politicians and people to their cause, the “Love does not exclude Association” also tries to educate citizens about the issue. For example, they published a film “Article 18”, a documentary about the status of same-sex marriage in Poland and the background to “political, social and religious Polish homophobia”.

Krakow, two days later, has become a little warmer again, but the sky is still grey. Kamil Maczuga is sitting at a table in the Spółdzielnia Ogniwo, a progressive cultural centre.

Kamil, together with Jakub Gawron, Paweł Prenta, Paulina Pająk, is one of the LGBT+ activists who have created a map showing which areas are considered LGBT+ Free Ideology Zones (red), which have rejected the resolution (green) and which are unclear at this moment (yellow). This map is called the “Atlas of Hate” (pl. Atlas nienawiści).

As Kamil explains, their aim would have been to collect data and display it on the map to show the extent of the issue. The four activists take care of the map and the website after their real job. Not only do they sacrifice part of their free time, but last year they were sued by seven counties for defamation. In any case, it’s about 20,000 zloty (that’s about 4,500 Euros) and that is a large amount by Polish standards, as Kamil says. 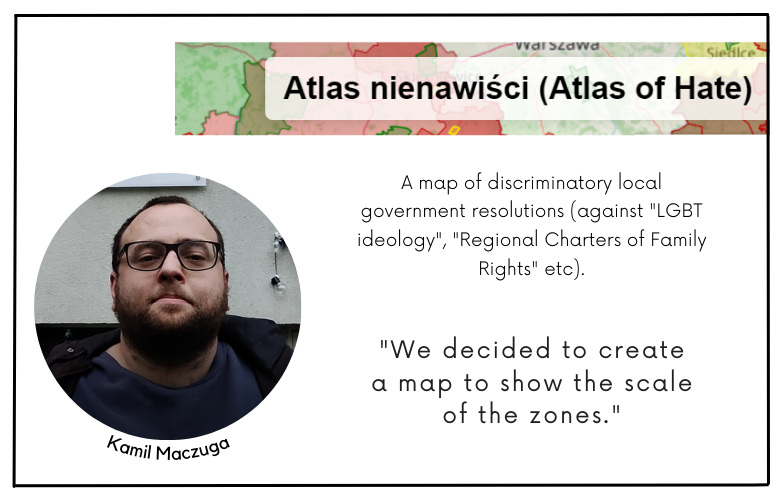 The sacrifices activists make to fight for their community can have other consequences besides legal ones. Hubert Sobecki explains that at a certain point he simply stopped functioning and has been taking antidepressants ever since, adding that he is not the only one in the organization. „You put your heart in it, you put hours of work and sometimes sleep in it and you see no impact. That’s the worst thing.“, Hubert explains. 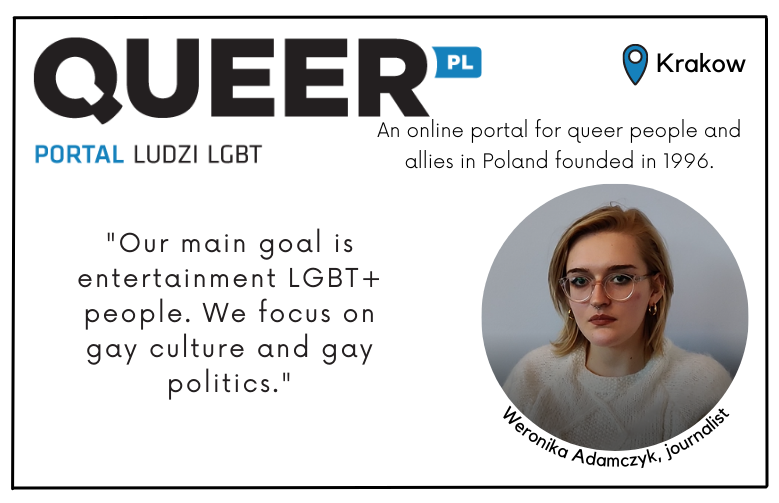 Also Weronika Adamczyk, who currently works for the Polish online magazine Queer.pl, which is specifically aimed at members of the LGBT+ community, says that this job might also cause her problems later on, as the majority of Polish media do not want anyone with too strong an opinion.

But do the activists believe that something could change in Poland in the future? Kamil sighs, he does not believe that the upcoming parliamentary elections in 2023 will change much in Poland, and Hubert also confirms that he can imagine many scenarios for the election, but most of them are bad.

Hubert Sobecki explains this attitude with the fact that the ruling party PiS has a lot of support from the citizens in Poland and that they know exactly how to mobilize voters for their purposes: “They won the first election with migrants, they won the second election with gays and right now they’re repeating the thing with the migrants again. I mean the government, they have public television, they can say whatever they want about you.” Weronika also stresses that if the PiS party remains in power, it is really bad for the LGBT+ community, as they actively try to incite the population against them.

Although Hubert believes that the party will lose at some point, he finds it difficult to assess: “But the question is at what cost, who is going to win instead, and what needs to happen for people to stop voting for them or don’t go vote at all.”

Kamil Maczuga takes a more optimistic view of the situation, saying that even though a lot of bad things have happened, good things have come out of the situation. He points out that there are now many more local activists who are standing up for the rights of LGBT+ people for the first time.

“We have more supporters than ever and the statistics of acceptance of homosexual people went up during this campaign of hate.”

Kamil outside of the cultural centre. // CREDIT: Marie Gross

Nevertheless, the two do not feel comfortable showing their homosexuality in public without thinking. Hubert tells, that he experienced many negative comments when he used to hold hands with his partner on the street. Kamil even thinks he wouldn’t walk hand in hand with a man, so he tells “If there’s any story about two men holding hands, it is that they were beaten just after this, so I don’t think that people are brave enough now.”

Weronika Adamczyk has a slightly different view. However, she believes it is more common for women to hold hands and that they probably have less to fear. She explains this as “Men think they can beat other men because of their masculinity. It’s not safe to do it for women, but it’s not that people don’t do it. I would do it, but it’s a risk.”

But Kamil and Hubert are not alone in their fear of assault. The study – EU LGBTI survey II – A long way to go for LGBTI equality – conducted by the European Union Agency for fundamental rights confirms this impression. In Poland, 83 percent often or always try to avoid holding hands with their same-sex partner in public. In addition, 42 percent said they had been harassed in the year before the survey. Both these figures are above the EU average.

In addition to such surveys, the European Union is also committed to addressing the concerns of the LGBT+ community. For example, the lifting of many LGBT ideology free zones can be attributed to sanctions, or the withholding of money by the EU.

Kamil emphasises that he knows the EU has done a lot and that he does not think much more can be done. Hubert, however, thinks that the EU should enforce its own rules more strictly: “We joined the club, and the club has rules and if you don’t abide then leave the club. But of course, it’s not that simple because it is super complex.”

The lack of progress for the rights of the LGBT+ community in Poland compared to most other EU countries can be explained not only by the conservative government, but also by the great influence of the church in Poland. In Poland, more than 80 per cent of the population are members of the Catholic Church, compared to only 45 per cent in the European Union.

In 2019, for example, the Archbishop of Krakow, Marek Jedraszewski, warned of the “rainbow plague”, saying in the same breath “…not Marxist, Bolshevik, but born of the same spirit, neo-Marxist. Not red, but rainbow.”. Kamil Maczuga explains that when the Pope says something along the lines that LGBT+ people should be respected, it triggers protests in Poland, because it is too progressive.

Despite all the problems that members of the community face, Weronika stresses that it is not all bad. They can do Pride Marches, or as they are also called in Poland to be less provocative Equality marches, and there are also gay clubs and cafes, which has nothing to do with the right, but that is also important especially for young people like them:

“I don’t want to sound like a privileged person and say that everything is okay and you can wear rainbow bags on the streets and nothing would happen. Because I know it’s not true. But also, not everything is that black and white.”

Weronika in a Cafe in Krakow // CREDIT: Marie Gross

In general, she says that leaving Poland is out of the question for her at the moment: “I know it’s bad, but I can survive here.” But she also explains that this could change in the future: “I don’t have anything to lose, they cannot hurt me now. I’m not in danger now, so I won’t leave. But the second I would have a family with a woman, I would be packing my things.”

Kamil and Hubert, for their part, have both seriously considered leaving the country or staying abroad and know couples who have already taken this step, but for the moment they have decided to stay and fight for their rights.