Skip to Content
Home Work Work Always on the go for the front line of the United Kingdom. Why do they continue to risk their lives for us?

With NHS (National Health Service) staff, in the UK, being pressured to the limit with COVID-19, it’s made clear just how hard the people on the frontline work. The other frontline workers are the British Armed Forces, but how are these brave individuals coping in this trade?

Service men and women explained how working for the front line of the UK defence is more than a career, it is a lifestyle. A lifestyle that effects family, physical and mental health and overall wellbeing.

Troops are expected to move regularly (posted) – roughly every 4 years however that can vary depending on circumstances – to military bases across the UK and rest of the world. These moves often cause disturbances particularly in family life, where husbands/wives must move with them and/or being apart from them and disruptions in children’s education.

“You need to have a very understanding husband or wife” …

… “I’ve missed Christmases, many of my kids’ birthdays and nearly missed the birth of my first son. I was away on operation, in Afghanistan and arrived home. Two weeks later my son was born.”

“It’s when you get married and have kids you realise how hard it is.”

Sgt Cassidy discussed how divorce rates in the military are much higher than those who work civilian jobs. Upon research, statistics showed that this is untrue and that divorce rates are lower in the military (standing at 9.6-9.8 percent) compared to civilians (standing at 20 percent). However, this statistic differs between age groups – with 1.3 percent of 18–29-year-olds getting divorced, compared to 0.8 percent of civilians.

Deployment (assigning military personnel to an operation that is away from home) can be the most dangerous part of the job and leaves many troops mentally and physically scarred. 636 British troops died in Afghanistan and Iraq over the last 20 years and a further 625 soldiers seriously wounded.

Sgt Cassidy says “Although I don’t have any physical injuries when you look at me, I still am effected by the tours I have been on. My hearing has declined significantly due to gunfire and explosions going off nearby. Over time it’s had an effect.” …

… “I wouldn’t say I suffer from PTSD (post-traumatic stress disorder), however I do notice that if I’m drinking and there’s an unexpected *BANG*, that can shake me. Just two months ago, I went to the pub. It was a busy evening and someone, behind me, fell and dropped the chair they were carrying. It shook me to the point where I had to go home and have a word with myself.”

Sgt Cassidy continued “I personally like going on tour still. Although it can be uncomfortable from an environmental point of view – generally you go away to unpleasant areas where it is either freezing cold or red hot and hours can be difficult as you’re not working a nine to five job.”

Sqn Ldr Davies has been on over five deployments to Afghanistan and Iraq. He talked about the impact being on tour has had on him,

“There were a few times, after being away, where I struggled. I came back, was drinking a lot and saying, ‘no no I’m fine’. Dealing with the stuff I seen I was struggling with, but I reached out and got the help I needed.” …

…” The support provided by the Armed Forces is excellent, I was great after going to the Chaplain (who is responsible for not only bringing faith to troops while away but also to provide support/care for soldiers who have witness intense scenes and traumatic situations), however, it is only there if you ask for it. If you need help you have to reach out.”

When asked why they continued to work the job and continue these tours, they said,

“It does come down to helping people. If I help one person while I’m away, then it makes it worthwhile. In that respect the job gives more than it takes” – Sgt Cassidy

“It is a love for the job and lifestyle. I get paid well to a job I really enjoy and while I do have to give things up, it’s only a small part you’re giving up, you’re not away forever” Sqn Ldr Davies.

There is a constant roll of recruits coming in, with an intake of 16,250 since 2000. The joining process for the armed forces is a long one, with basic training lasting from 10-14 weeks and phase two training taking as long as two years for some roles.

Two recruits, aged 24 and 17 years old and whose identity is to be kept private, are halfway through their basic training, at Halton, to join the RAF, one as a dental nurse and the other to RAF Regiment. They said,

“I wanted to join up and not work on civi street (as a civilian not in the military) due to the benefits the military provides like welfare, free amenities etc. I had gone through university and seen the civilian life, so I wanted to try the military. My dad was in the navy, so I am used to the lifestyle.”

These recruits have already in their fifth week, with five weeks left.

“This training is hard. It tests you and pushes you, but I think it is preparing us well for what we could potentially face. You have to come here mentally prepared to the best you can but of you course you don’t know how you will react until you’re in that situation [on the battlefield].

71-year-old veteran, Joseph Steele, was in the Royal Air Force for nearly 40 years. In his time, he served in Afghanistan, Iraq, Falkland Islands, Oman and more. He, too, became part of the Marine Corps for two years and SAS (Special Air Service) for a time, before going back to the Air Force to continue his career. He talks about his extensive time in the military, saying,

“I liked being in the military, it was a way of life. I was never scared or stressed about situations I was in. Even walking down, the streets of Northern Ireland (at the time of the Troubles) I never got scared while some people couldn’t even sleep” …

…” I did give up a lot if you think about it, but it didn’t feel like I was giving anything up as I enjoyed what I did so much and had a family that supported me and also enjoyed the lifestyle. My wife loved travelling with me and living in places like Cyprus and Germany.”

Mr Steele also mentioned how he now suffers from severe hearing difficulties and while he says he doesn’t get bothered by what he has saw and experienced, he is sure that there are some effects from it that he isn’t aware of because “that is the way he has always been.”

After speaking to these people, it is clear there are common factors that run within these people. Bravery and love of the job run in people who work on the front lines and the sense of a community is strong, with support for each other and a sense of community shown throughout.

“I have no plans to leave, I hope to get promoted soon” – Sqd Ldr Davies

“The people I met really made the job, I’ve met people who are friends for life, people who have been there for me at toughest of times. I had the best time of my life in the military” – Mr Steele 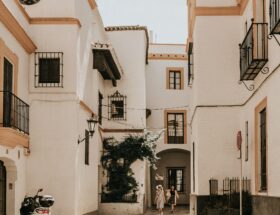